An all-round show from captain Travis Head guided Australia A to a close 32-run win against South Africa A in the ongoing one-day quadrangular series in Bengaluru.

An all-round show from captain Travis Head guided Australia A to a close 32-run win against South Africa A in the ongoing one-day quadrangular series in Bengaluru on Saturday. Head struck 117-ball 110 dishing out 13 fours and a six to power his team to 322/5 at the M Chinnaswamy Stadium.

In reply, South Africa A captain Khaya Zondo hit a century of his own – 117 off 104 – and his 82-run association with No. 9 Robert Frylinck brought his side closer before they were all out for 290 in 48.4 overs.

Australia A were off to a bad start when they lost opener Usman Khawaja to a run-out on 10. D Arcy Short and Head then steered the innings taking them to 100 runs. However, Short fell one short of a half-century after being trapped lbw by Shaun von Berg. That did not bring any respite for the South Africans as Head then found Marnus Labuschagne (65 off 67) and together they added 136 runs for the third wicket.

The Australians smashed 89 in the final 10 overs with Matt Renshaw playing an uncharacteristic innings – belting an unbeaten 42 off 29 with six fours.

South Africa A were off to a solid start as the openers added 89 runs. Head then used his offspinners to get rid of them Sarel Erwee (37) and Gihahn Cloete (50) in the space of 9 runs. A collapse followed they were 89/0 and lost seven wickets for the addition of just 78 runs.

At 167/7 in 30.4 overs, it looked Australians will seal an easy win but Zondo made sure his team did not drop out without giving a tough fight. He struck four fours and seven sixes during his innings. He was the last man to be dismissed via run-out as Australia A kept their hopes of making the final of the tournament alive. 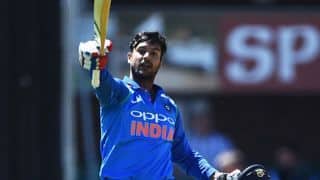