New Delhi: Leg-spinner Amit Mishra has joined the chorus to defend the spin-friendly conditions in India, saying that his side have also faced challenging conditions away from home, but have never complained about it. “When we go outside, we also face similar conditions. Some matches end in draw and some won. So, one has to adapt himself as per conditions. In England, spinners do not get much advantage. We have never complained about it,” the 33-year-old told media ahead of the fourth Test match against South Africa. SCORECARD: India vs South Africa 2015, 4th Test at Delhi

Several pundits and former players slammed the spin-friendly conditions in India, which saw the Nagpur Test end inside three days. Besides, skipper Virat Kohli and team director Ravi Shastri had also defended the spin-friendly Indian pitches. Lashing out at the critics, Mishra said that they should praise Indian bowlers’ performance instead of considering poor pitches as a reason for South Africa defeat.

“They should highlight what we have achieved. If spinners are bowling well, then there should be talks about their performance rather than complaining about the pitches,” he added. Mishra also emphasized that batsmen should try to analyse and adapt themselves as per the conditions. “Batsmen should try to adapt themselves as per the game demands. They should look after their techniques. They should try to analyze how they should play,” the leg-spinner added. ALSO READ: Amit Mishra: Spinners did not get credit they deserve for India’s series victory against South Africa

India took an unassailable 2-0 lead in the four-match series after comprehensively defeating the tourists by 124 runs in the third Test. With the win, India ended South Africa’s nine-year winning streak in away Test series. Reflecting on his side’s performance, Mishra said that they bowled quite well and insisted that the great bonding had helped them to clinch the Test series.

“We are bowling well. The best thing is that we have great combinations and we understand each other quite well, which is very important for any country if they want to win the matches or want to clinch the series,” the spinner added. ALSO READ: Faf du Plessis: Indian pitches dictate the way one plays and performs

Both the sides will next play the inconsequential final Test at Delhi’s Feroz Shah Kotla from December 3. 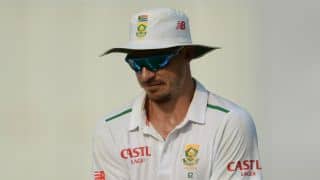