Allrounder Rahkeem Cornwall made his debut on Friday and it took him just 17 deliveries to get his first Test wicket.

West Indies allrounder Rahkeem Cornwall made his debut on Friday and it took him just 17 deliveries to get his first Test wicket and that too of India stalwart Cheteshwar Pujara. The offspinner bowled it short, extracted bounce off the surface forcing Pujara to rock back and end up chipping the ball into the hands of point to be caught for 6.

The celebrations weren’t exaggerated. They were subdued considering the hype built around him because of his frame and the 140 kg cult figure didn’t disappoint.

Before he could impress the star-studded India batting line-up with his spinning deliveries, Cornwall had already made his contribution when he accepted the catch of opener KL Rahul in the first slip in the seventh over. He took one more, again of the bowling of his captain Jason Holder and that too of Mayank Agarwal who had scored a fighting half-century.

“Good feeling to get him (Pujara) as my first Test wicket,” Cornwall said after the day’s play. “It was nothing really new to me but it was a good feeling. It was a good feeling making my debut. I think the ball was coming on to the bat well. Now we have to work hard and put the ball in the right areas. It was an even day, the bowlers put in the hard yards.”

Cornwall bowled 27 of the 90 overs West Indies bowled during the opening day of the second Test in Kingston as India fought back to be at 264/5 when the play ended. Cornwall’s figures were an impressive 1/69, shouldering the bulk of bowling duties. “It all depends on the pitch, depends on what it is giving me. I just assess the conditions and decide how we can go from there,” he explained his approach.

Alongside the pacers, he kept the Indian batsmen under control who had started in an aggressive fashion. While the honours were shared, the 26-year-old Cornwall said one more wicket would have put West Indies in a strong position.

“One (more) wicket would be comfortable but I think we are in a good position. When we come back tomorrow, I think we just have to take the next wickets and move forward,” Cornwall said. 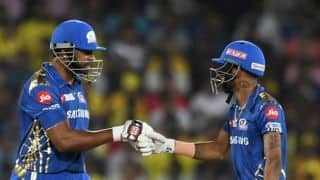 Hardik Pandya has gone through a lot, will only get better: Kieron Pollard