During a practice session where the England team was engaged in a game of football, Bairstow suffered an injury to his right ankle.

There are doubts over wicketkeeper batsman Jonny Bairstow s participation in the fourth ODI between England and Sri Lanka in Pallekele on Saturday. During a practice session where the England team was engaged in a game of football, Bairstow suffered an injury to his right ankle which makes him a doubtful starter. He will have to undergo a fitness test early on Saturday to get a clear picture over his availability.

If Bairstow s injury doesn t heal by tomorrow, he will be taken for scans in Colombo on Sunday. In his absence, Alex Hales is a strong replacement option for England at the top. Bairstow, who has been opening the innings in the ongoing series alongside Jason Roy, completed 1000 runs this calendar year during the second ODI, making him the sixth English cricketer to do so.

Allrounder Joe Denly, who joined the squad as a replacement for injured spinner Liam Dawson, could also be in line to replace Bairstow should he not be cleared to play. Denly himself knows a thing or two about injuries for he had suffered a knee injury while playing football in 2009, after which the then England coach Andy Flower had banned the sport as a warm-up game for England cricketers.

“A few of the lads were saying I ruined their football – the best part of the day as they say. Thankfully it is back in now and hopefully no more injuries,” Denly said.

England lead the series 2-0 and have a chance to secure a series win on Saturday. 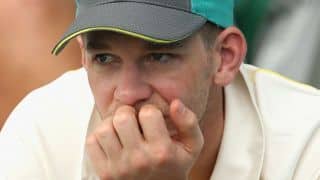 We're a long way off from being a finished product: Tim Paine