The BCCI was apprised of an anonymous threat to Virat Kohli and his team in the West Indies.

The anonymous email that reportedly warned the BCCI about a threat to Virat Kohli‘s Indian cricket team in the West Indies was first received by the Pakistan Cricket Board (PCB), who then flagged it to the ICC.

According to the Times of India, the email first landed in the PCB’s official inbox and threatened to “kill Indian cricketers”.

The PCB forwarded the email to the ICC, who contacted the BCCI. The Indian cricket board, having received a copy of the email, approached the country’s home ministry and the Indian embassy in Antigua, where Kohli’s team will play a Test against West Indies from August 22.

Rahul Johri, the CEO of the BCCI, told the Times of India: “We have briefed the home ministry and shared the email. The embassy in Antigua has also been contacted and briefed. Mumbai Police has also been informed and the security of the team in the West Indies has been beefed up.”

The touring Indian cricket team was swiftly given additional security at Coolidge, where it is playing a three-day tour match versus West Indies A.

As reported by IANS, a senior BCCI functionary dismissed the anonymous email as a hoax. “All things are in order. The Indian team has been provided with an additional pilot vehicle and the Indian High Commission informed the Antigua government on the same just as a precautionary measure,” the functionary said.

Relations between the governments of India and Pakistan remain strained after the abrogation of Article 370, the part of the country’s constitution that gives Indian-administered Kashmir special status, by India’s BJP-led government.

On August 5, the BJP government revoked Article 370, a sensitive part of India’s constitution because it is what guarantees significant autonomy for the Muslim-majority state of Kashmir. After Article 370 was revoked, the Pakistan government condemned India’s decision and termed it illegal while stating that it would “exercise all options” to counter it.

Over the weekend, after Pakistan army called the Kashmir issue a “nuclear flashpoint”, Prime Minister Imran Khan, in a series of tweets, warned the international community of danger from India’s nuclear arsenal. 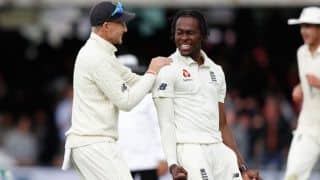 Archer makes things happen when not many others in world cricket can: Joe Root