The secretary of the Board of Control for Cricket in India (BCCI) Anurag Thakur wrote an angry email on Monday.

The secretary of the Board of Control for Cricket in India (BCCI) Anurag Thakur wrote an angry email on Monday to the former president as well as the incumbent chairman of the International Cricket Council (ICC) N Srinivasan, asking him to provide a list of alleged bookies to the Indian cricket board as well as Srinivasan’s family members. READ: N Srinivasan’s ICC informs BCCI about Anurag Thakur meeting alleged bookie

Thakur posted the letter on the social media website Twitter, writing to Srinivasan that since his ‘friend’, Neeraj Gunde is circulating letters against him to the media in New Delhi which resulted in the ICC sending an advisory in public, he also intend to make this particular letter public.

In his letter, Thakur has acknowledged knowing an alleged bookie Karan Gilhotra, who is heavily active in politics and cricketing matters in Punjab and few other states. However, Thakur declined knowing of any ‘activities as a suspected bookie’. READ: N Srinivasan in fresh controversy as allegations of spying on BCCI members surface

Here is the copy of the letter sent by Anurag Thakur to N Srinivasan: 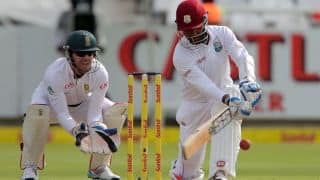