New Delhi: Anurag Thakur, former president of the Board of Control for Cricket in India (BCCI), has hailed the exemplary performance of the Indian women’s cricket team in the recently concluded ICC Women’s World Cup, saying the team despite being unable to clinch the coveted trophy, won the hearts of 1.25 crore Indians. Thakur met Indian wicket-keeper batsman Sushma Verma and felicitated her on Thursday in the national capital. “Every Indian is feeling proud of the performance of the women’s cricket team. Their performance was exemplary. Even though they were unable to win the World Cup, they won the hearts of 1.25 crore Indians,” Thakur told ANI. Indian Railways to reward INDW cricket team with INR 1.30 crores

“Especially, for us it was a great achievement as wicketkeeper Sushma Verma made the people of Himachal Pradesh proud,” he added. The former BCCI chief further asserted that the Women in Blue will come out with more improved performance if they are provided with more exposure and facilities. The Indian team performed exceedingly well throughout the tournament before ending up as runner-up, going down by nine runs to England in a nail-biting final at Lord’s on July 23. During the course of the event, they registered remarkable victories over Australia, New Zealand and hosts England, which eventually won the trophy. Deepti Sharma: Mithali is the Dhoni of Indian Women’s team

On Wednesday, the Indian team was given a rousing reception at the Chhatrapati Shivaji International Airport in Mumbai on their return from London. 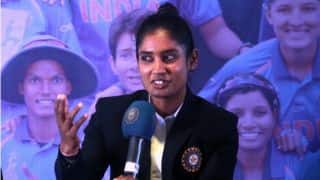