The Indian Railways announced on Thursday a cash reward of Rs 1.30 crore for 10 members of Indian women's cricket team.

New Delhi: The Indian Railways announced on Thursday a cash reward of Rs 1.30 crore for 10 members of Indian women‘s cricket team for their stellar performance throughout the recently-concluded ICC Women’s World Cup. All-rounder Harmanpreet Kaur and skipper Mithali Raj will also be given gazetted officers post. Earlier, the Board of Control for Cricket in India (BCCI) had also rewarded the Mithali Raj-led side with the cash prize of Rs. 50 lakh to each player. The board had also declared that the support staff will be given cash reward of Rs.25 lakh each. The Women in Blue performed extremely well throughout the tournament before ending up as runner-up, going down by nine runs to England in a nail-biting final at Lord’s on July 23. On Wednesday, the Indian team was given a rousing reception at the Chhatrapati Shivaji International Airport in Mumbai on their return from London. India Eves felicitated by Sports Minister Vijay Goel

Earlier, Union Minister of Youth Affairs and Sports Vijay Goel on Thursday felicitated the Indian women s cricket team for their tremendous performance in the recent ICC Women s World Cup. Congratulating the team for putting up great show, Goel said the Mithali Raj-led side might have lost the finals against hosts England at Lord s by nine runs, but they have won the hearts of the entire country. Mithali: Women should play Test cricket as frequently as limited-overs cricket

I believe that our women s cricket team has done exceedingly well that any form of appreciation will be less for them. Despite ending as runner-ups, I feel that the women s team has won the finals because they have won the hearts of the entire country. And winning the hearts of the entire country is so big thing that even Prime Minister Narendra Modi has said, `We are proud of you`. And that is why PM Modi says `if you play, you will flourish`, Goel said. 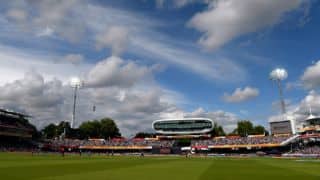