The 19-year-old triggered a middle-order collapse of seven wickets for 72 runs on Wednesday at the Kotla.

Arjun, son of Indian icon Sachin Tendulkar, triggered a middle-order collapse of seven wickets for 72 runs on Wednesday as Delhi fell from 274/2 to 346/9.

The teenager had gone wicketless with the new ball but roared back as the innings progressed. Thanks to centuries to Gagan Vats (100) and Priyansh Arya (152) Delhi were well placed to get near Mumbai s first-innings total of 453, reaching 274/2 until Arjun had the skipper Ayush Badoni for 20 in the 78th over.

In his next over, Arjun dismissed Vaibhav Kandpal for 5 and then added Gulzar Sandhu and Hrithik Shokeen in successive balls to be on a hat-trick. The milestone was not be, but Tendulkar bowled tailender Prashant Bhati for his fifth wicket.

Arjun made headlines in July when he played his first Youth Test for India U-19s in Sri Lanka. He played both four-day matches and took three wickets while scoring 0 and 14. 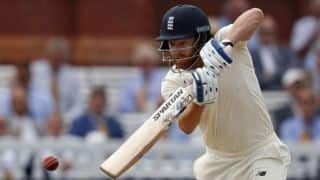