Ponting, who is coaching Delhi Capitals in IPL, was named Australia assistant coach during the World Cup 2019.

While the appointment of Ricky Ponting as Australia s assistant coach for the upcoming World Cup 2019 is seen as a major boost to the team, there have been whispers that he may have to give up his position as a Delhi Capitals coach in the Indian Premier League (IPL) due to the possible Conflict of Interest issue which is scheduled to take place ahead of the ICC event. (ALSO READ: Ricky Ponting to join Australia’s coaching staff for World Cup)

Shane Warne, who was named mentor and brand ambassador of Rajasthan Royals (RR), meanwhile rubbished the reports where he was claimed to have said that Ponting must step down from his position of a coach of the IPL team. However, the former Australia leg-spinner, via a tweet on , made it clear that he did not say that Ponting should be banned from the IPL. (ALSO READ: Australia can win World Cup with Steven Smith and David Warner: Ricky Ponting)

The Board of Control for Cricket in India (BCCI) have not allowed the India and India A coaches and the support staff to be a part of the IPL teams in any capacity. Rahul Dravid, who was coaching Delhi Daredevils (now named Delhi Capitals) in 2017, was asked to step down from the position as it could have been a conflict of interest as he was coaching India Under-19 and India A sides. (ALSO READ: Ponting looking forward to Smith, Warner’s return)

Warne tweeted: Articles on me saying Punter should be banned from the IPL are simply not true – so stop the BS. When asked, I said it would be a silly move from the BCCI to not allow him to coach Delhi because he s ass coach of Aust. But if thats the decision – then he would have to accept it!

The 12th edition of the IPL is expected to kick off from March 23. 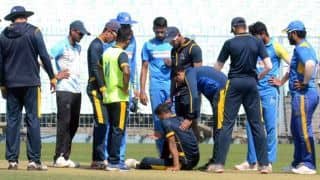