England have so far used 15 players and there are expected to be changes for Sydney.

Battered England are desperate to avoid the ignominy of a 5-0 series whitewash against Australia as they scramble to salvage some pride in the final Ashes Test in Sydney starting on Friday.

Alastair Cook’s team — coming off a dispiriting eight-wicket loss in the fourth Test in Melbourne — face becoming only the third English side to lose an Ashes series 5-0 to their oldest rivals.

It has been a tour from hell for England with the loss of senior players Jonathan Trott (stress) and Graeme Swann (retirement), star players out of form and Kevin Pietersen admitting his team-mates are “mentally fragile” from playing in back-to-back Ashes series.

England have so far used 15 players and there are expected to be changes for Sydney, with Gary Ballance, Scott Borthwick and Steven Finn mentioned as possibilities. In contrast, Australia have been unchanged in all four Tests.

Former England captain Michael Vaughan believes the tourists will be unable to stop the Mitchell Johnson-led Aussie juggernaut in Sydney with the same team that succumbed in Melbourne in four days.

“It is not easy for them. England will not do this with the same XI. There is too much baggage, there are too many scars,” he wrote in an English newspaper.

As England’s tour has unravelled so has the pressure cranked up on Cook as skipper.

“I’m totally responsible as captain for the team and if, at the end of the series, the selectors decide I’m not the best man for the job, then so be it,” Cook said after the match in Melbourne, where England surrendered a winning position.

“It would hurt and I’ve got no plans of going anywhere. I’m desperately trying to use as much of my experience of playing 100 Tests to help turn this team around.”

Cook, who dropped two catches on the final day in Melbourne, has called on his fellow senior players to pull out something special for England to avoid the anguish of an Ashes whitewash.

“We’ve some very good players in our dressing room. We’ve some record-breaking players who will have some fantastic days left in an England shirt,” he said.

“We need that coming out of us now and what we need in Sydney is an outstanding 100 or an outstanding five-for [wickets] and then everyone jumping on the back of that.”

Australia, who have made a stunning turnaround since their 3-0 Ashes series defeat in England just months ago, have injury concerns over all-rounder Shane Watson (groin) and paceman Ryan Harris (knee).

All-rounder James Faulkner is in line to come into the team and fellow Tasmanian Alex Doolan was also called up to the squad as injury cover.

“It would be great to have the same team for all five Tests but I encourage the selectors to pick the best 11 players to help us win this Test,” skipper Michael Clarke said.

“If it means making a change then that’s what we’ve always done but I think it would be very special if we win in Sydney to have played all five Tests together. I think that would be an unbelievable feeling.”

Johnson needs nine wickets to become the fourth Australian bowler to take 40 wickets or more in an Ashes series along with Terry Alderman (twice), Rodney Hogg and Shane Warne.

Of those, only Warne took his 40 wickets in a five-Test series, which Johnson is seeking to emulate.

The Sydney Cricket Ground is traditionally a spin-friendly wicket and England have won two of the past three Ashes Tests played there. 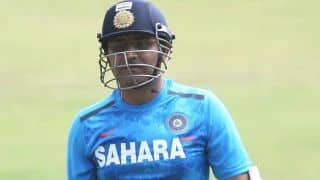