England were left on the brink of a humiliating 5-0 series defeat on Saturday after Australia dominated the second day of the final Test in Sydney to establish a 311-run lead.

Flower has come under scrutiny in the British media during the series, but Collier believes that he remains the best man to lead England forward.

“We need that experience. When you go through a transitional period you need somebody with knowledge, somebody who knows our system, somebody who works with all of our key coaches,” he told Sky Sports News.

“Andy has all of those attributes and more. I’m sure he’ll do a great job leading us into 2015.”

Cook has struggled for runs in Australia and has experienced a series defeat for the first time in his year-long tenure as captain, but Collier says that the 29-year-old “fully deserves our support”.

“People do grow into the job,” Collier added. “Captains mature, players mature. It will take some time for people to reach their absolute pinnacle.

“We were convinced he was the right man at the time and we’re still convinced today. We look forward to both Alastair and Andy leading us to success in the future.”

After England’s last Ashes whitewash seven years ago, the ECB produced a document the Schofield Report assessing the state of the English game.

However, despite the soul-searching sparked by the current series, Collier does not feel there is any need for a similar review now.

“We are not going to do a review of that nature, but we will do a full debrief and learn the lessons that we need to learn from this tour,” he said.

“We’ve had a great run coming into this series. In 13 Test matches coming into the series we’d won 10 and drew three. It had been a good year to start with, but clearly we need to re-stock for 2014.” 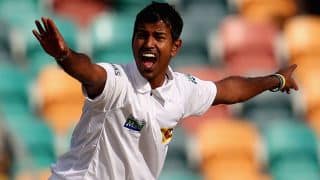 Nuwan Kulasekara ruled out of Test series against Pakistan