Australia's cricket writers on Saturday finally had something to cheer as Michael Clarke's tourists turned the screws in the third Ashes Test at Old Trafford. 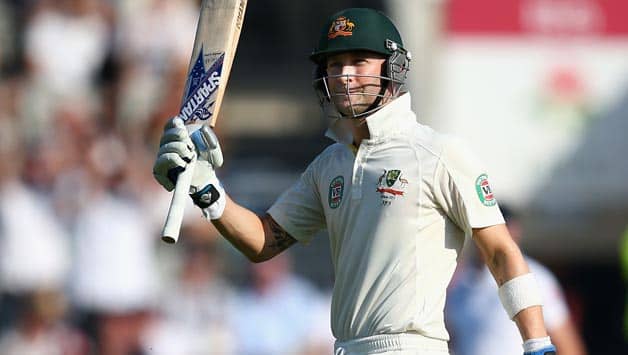 Australia‘s cricket writers on Saturday finally had something to cheer as Michael Clarke‘s tourists turned the screws in the third Ashes Test at Old Trafford.

At Friday’s close Ashes-holders England were 52 for two in reply to Australia’s first innings 527 for seven declared, a deficit of 475 runs in a match the tourists — 2-0 down with three to play — had to win to stand any chance of regaining the urn.

Coming after the humiliation of Australia’s 347-run defeat in the second Lord’s Test, the country’s newspapers took heart as the Baggy Greens had England on the back foot.

“Suddenly England is rediscovering how jittery Ashes cricket can be after Australia turned the screws on the second day of the Old Trafford Test,” The Australian’s Wayne Smith said.

“At no stage in the series so far has England been placed under sustained pressure from Michael Clarke’s side but they were today and they didn’t handle it with any aplomb at all.”

Fairfax Media‘s Chris Barrett said England’s “bellyaching laughter” was on hold for the time being.

“Michael Clarke said he knew he would be ridiculed when he claimed Australia could still win the Ashes.  Sneering smiles haven’t been completely removed from faces yet, but the bellyaching laughter is on hold for the time being,” he said.

“Clarke’s highest score on foreign soil and first century at No.4, capped off by Peter Siddle’s double blow late in the day, enhanced Australia’s grip on the third Test as the captain’s 187 helped keep England in the field for nearly two days.”

Ashes villain David Warner came in for some stick, with the Daily Telegraph‘s Malcolm Conn saying the explosive batsman’s brief innings and a wasteful review contrasted with the imposing knock by Clarke.

“As the Australian captain attempted to bat his team into an impregnable position, Warner was booed onto Old Trafford and booed off again in the space of 16 minutes,” Conn wrote.

During the second Test at Lord’s Warner’s brother Steven raged on Twitter about Shane Watson wasting a review.

It came after Warner had been fined for his own Twitter rant against two Australian cricket journalists in May and subsequent suspension for punching England batsman Joe Root.