Chris Gaffaney is confident his experience of dealing with 'domestics' as a policeman will stand him in good stead during Ashes.

London: Umpire Chris Gaffaney is confident his experience of dealing with ‘domestics’ as a policeman will stand him in good stead when it comes to maintaining order between England and Australia during the upcoming Ashes series. The 39-year-old New Zealander played 83 first-class matches for Otago before changing careers but is now a full-time umpire, having joined the International Cricket Council‘s (ICC)elite panel last month. Read:Ashes 2015: Ben Stokes won’t shy away from war of words

Gaffaney is due to act as third umpire in the opening two matches of the Ashes, which begin with next week’s First Test in Cardiff, before standing in the middle during the Third Test in Birmingham. There has been plenty of speculation about the amount of ‘sledging’ or verbal abuse of opposition players that might take place during a highly-charged series but Gaffaney is ready to step in should the need arise.

“The skills picked up in police work correlate to umpiring, it helps in terms of managing the game,” he told www.icc-cricket.com on Thursday. “It can get heated, it’s just like going to a domestic on a police job. You need to know when to listen, when to speak and when to watch them and let them play. In terms of managing the game it can be a challenge. They can get very competitive and it can get heated. I’m very fortunate to have had that training in the police which I can take to umpiring,” he added. Read: Ashes 2015: Trevor Bayliss wants England to ‘fight fire with fire’ against Australia 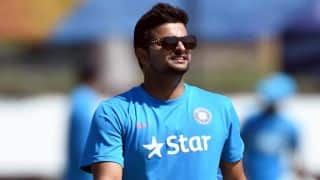