England know they have a problem when it comes to top-order collapses but whether they can solve it in time for the third Ashes Test at Edgbaston is another matter entirely. Australia leveled the five-match series with a crushing 405-run win in the second Test at Lord’s on Sunday. In the process a potent pace attack led by left-arm fast bowler Mitchell Johnson again exposed England’s frailties against the new ball. At Lord’s they were 29 for three and then 42 for three in a humiliating collapse to 103 all out, with England having lost their first three wickets for 52 or fewer runs eight times in seven Tests. READ: Ashes 2015: Alastair Cook wants England’s top order to fire following rout in 2nd Test

The days when up and coming English players were exposed to some of the world’s leading fast bowlers in county cricket have long gone, undone by an expanded international programme which cuts across the domestic calendar. As a result they have little in the way of prior practical experience when it comes to facing a fast-bowling trio comparable to that of Australia’s Johnson, Mitchell Starc and Josh Hazlewood.

“The best players in county cricket are the ones who score the most runs. You don’t face that kind of pace in county cricket, at all really… you get the odd one, but you don’t get three of them. So it is different, but the best players adapt.” said England captain and opening batsman Alastair Cook. READ: Ashes 2015: Trevord Bayliss admits England had their ‘backsides smacked’ at Lord’s

Experienced batsman Ian Bell averages under 11 in six Tests, whil opener Adam Lyth and number three Gary Ballance have both looked vulnerable against Australia’s quicks. One suggested solution has been for Joe Root to change places with  Ballance by going up to number three, with the left-hander dropping down to five.

As for Lyth, the fact he is the sixth batsman tried as an opener alongside Cook since now England director Andrew Strauss retired three years ago, tells its own story. There is no obvious candidate to replace Lyth, although there are ‘hunch’ choices in Nottinghamshire’s Alex Hales and Kent’s Daniel Bell-Drummond, who made a century against Australia in a tour match last month. READ: England’s scars deepen after monumental thrashing by Australia at Lord’s in Ashes 2015

Yorkshire’s Jonny Bairstow pushed his claims for a top-order spot with a fifth County Championship hundred of the season on Sunday while James Taylor has made 291 for Nottinghamshire in their ongoing match against Sussex. But both batsmen have been tried by England before and been found wanting.

Meanwhile Trevor Bayliss said he had no plans to read the riot act to his top-order specialists before the third Test, which starts on July 29. “I very rarely bare the teeth,” he explained ahead of a meeting of the England selectors on Tuesday. As long as the players are giving their utmost, I’m not going to get angry. They play under enough pressure, and I’m certainly not going to add to that.” READ: Ashes 2015: England’s top order a major issue

One option that England, barring a colossal U-turn by Strauss, will not consider is ending Kevin Pietersen‘s international exile. Pietersen has been on the outside looking in since being axed after England’s 5-0 Ashes thrashing in Australia in 2013/14. In May, Strauss said Pietersen would remain frozen out because of the “massive trust issues” that existed between the star batsman and the England and Wales Cricket Board.

“Deep in thought right now…ridiculous that I’m lying on a beach when I should be in UK prepping for the 3rd Test! So silly really! Sad! “Batting as well as ever & the team have huge issues with top order! What a waste, just lying on a beach! I wish I could help! Pietersen wrote on Twitter on Monday. READ: The Ashes 2015: Trevor Bayliss hopes for livelier wicket in Birmingham

“So, so, so, so silly!”, added the South Africa-born batsman, who has scored 8,181 runs in 104 Tests and been a member of four Ashes-winning squads. 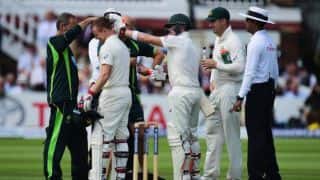 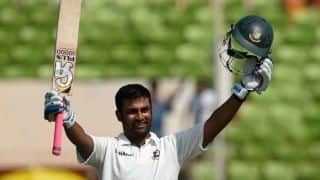