Clarke made mention of the influence of the ECB while making the statement.

Australia captain Michael Clarke claimed pitches prepared specifically to help England‘s bowlers were to blame for his side’s failure to retain the Ashes. Despite marking his last match before international retirement by leading Australia to victory by an innings and 46 runs in the fifth Test at The Oval, Clarke was frustrated that a succession of bowler-friendly pitches had played a decisive role as England won the series 3-2. While Australia won on the two flattest pitches of the series at Lord’s and The Oval, they were ruthlessly exposed by England’s pace bowlers on lively tracks at Cardiff, Edgbaston and Trent Bridge. READ: Australia give fitting farewell to Michael Clarke, Chris Rogers

Hinting that those surfaces were ordered by the England hierarchy in a bid to expose Australia to conditions that favoured the hosts, Clarke suggested groundsmen should be given more say in pitch preparation.

“You’re given a role, a responsibility, and a job and you want to be able to do your best at that,” Clarke said.

“I’ve got a feeling, from the conversations I’ve had with a lot of the groundsmen in this country, they’re a little bit disappointed they haven’t been able to do as they’ve wanted to do.

“If I go to the groundsman at the Gabba and say ‘I want it to be a turner like the SCG’ he’ll absolutely laugh at me. It might be different around the world.”

Condemned to become the first Australian to lose four Ashes series in England since the 19th century, Clarke suggested players and fans were getting a raw deal from the current trend of home boards preparing pitches to suit their teams. READ: I’m blessed to have played for Australia, says Michael Clarke

“I think Test cricket is a five-day battle. I want to see good and fair cricket for both batters and bowlers. The fans of the game deserve to see a really good contest for five days,” Clarke added.

“I think that’s the way the game should be played. I think the past three Test matches have not been that case.”

“The wickets are the same for both sides. In three of five Tests we played better and that’s why we won the Ashes,” Cook said.

“We’ve got game-changers and we’ve been able to ram home our advantage. That’s why we won the series.” READ: Being underdogs ahead of Ashes 2015 helped us win, says Alastair Cook 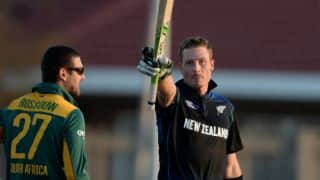 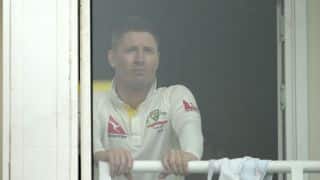