The left-arm fast bowler's 68-Test career has not been one of uninterrupted progress.

Birmingham: Mitchell Johnson heads into this week’s Ashes clash against England at Edgbaston needing just one more wicket to become only the fifth Australia bowler to take 300 in Tests.

The left-arm fast bowler’s 68-Test career has not been one of uninterrupted progress, with Johnson mocked mercilessly by visiting fans when he lost control of both line and length during England’s 2010/11 Ashes series win in Australia.

But it was a very different story in 2013/14 when he took 37 wickets at under 14 apiece as Australia regained the Ashes with a 5-0 rout of their arch-rivals. Peter Nevill to be Australia’s wicketkeeper in 3rd Test at Edgbaston

Johnson showed signs of that impressive form during the recent second Test at Lord’s where he led Australia’s pace attack in a 405-run thrashing of England that levelled the  five-match Ashes series at 1-1 heading into Wednesday’s third Test at Edgbaston.

“He’s bowling as well as I’ve seen throughout his career,” said Australia captain Michael Clarke of Johnson, in line to join Shane Warne, Glenn McGrath, Dennis Lillee and Brett Lee as the only Australian bowlers to have taken 300 Test wickets.

“These guys worked exceptionally hard in the gym to stay healthy and Mitch is as fit, if not fitter, than those blokes put together.”

“He trains really hard. Hence why he’s been able to play for such a long period of time, have consistent success and bowl at that pace over that period as well.”

England have tried to play down talk of a resurgent Johnson, with all-rounder Moeen Ali insisting Australia’s spearhead had “bowled really well in one innings out of four” in the current series to date. England look to bounce back after an dismal outing at Lord’s

If the grass covering that was on the pitch at Edgbaston on Monday remains intact come the start of Wednesday’s match, it should certainly aid Johnson and his fellow Australia quicks.

There have been suggestions that England and Wales Cricket Board (ECB) chiefs have ordered groundsmen to prepare deliberately slow surfaces for the five-match series in a bid to blunt Australia’s impressive pace attack, although England team director Andrew Strauss has denied issuing such a request.

But such a tactic, if there was one, played into Australia’s hands at Lord’s as the tourists’ pacemen are quicker than their England counterparts, who suffered more from the lack of seam movement at the ‘home of cricket’. Alastair Cook backs Ian Bell to come good at No.3 at Edgbaston

Clarke said that if the Edgbaston pitch, which he likened to a green seamer at Brisbane’s Gabba ground, still looked the same on Wednesday morning he would have no qualms in bowling first should he win the toss.

“There’s 9mm of grass on it at the moment. It looks like a Gabba Shield game,” Clarke said.

“That’s as much grass as I’ve seen on a pitch in England, so I wonder if the talk in the media and the commentators’ talk has made the groundsmen a little bit nervous,” he added while nothing that for all the talk about slow pitches both th first two Tests had ended with more than a day to spare. Clarke confirms selectors’ decision to drop Brad Haddin for 3rd Ashes 2015 Test

“If it stays like that and I win the toss, I will most definitely bowl first. But I don’t think it will stay like that.” 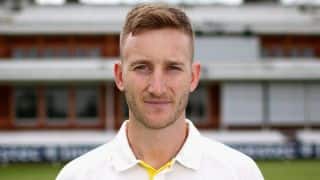 Ashes 2015: Peter Nevill to be Australia's wicketkeeper in 3rd Test at Edgbaston