Jofra Archer and Jack Leach have been tipped as England's answer to countering Smith.

The first Ashes Test between England and Australia at Edgbaston turned out to be about one man, Steve Smith. When you think of cricketing comebacks, Smith’s comeback to Test cricket has to line right up there. England had no clue to his defiance. The clattering of boos that greeted him on the first day turned to claps by the time he was dismissed for 142 in the second innings. Smith had won. Towards the end, he had done enough for Nathan Lyon to rattle England and give Australia a 1-0 lead.

Unsurprisingly, what Australia’s 251-run did was bring out bold claims and predictions, with many former Australia greats foreseeing a 5-0 rout of England. In the absence of James Anderson, England looked out of gas in the second innings, allowing Matthew Wade to score his third century. Lack of assistance from the surface didn’t help them either, and England were left further handicapped when Moeen Ali proved ineffective.

Moeen has been left out for Lord’s, while Jack Leach has been included as the 12th man. Both he and Jofra Archer have been tipped as England’s answer to countering Smith. Archer warmed himself with a hostile 6/27 and by scoring 108 against Gloucestershire 2nd XI and is expected to be England’s hope if they are to bounce back from their embarrassing loss.

There have been polar opposite thoughts regarding how the Lord’s surface is going to play. Josh Hazlewood expected the surface to be spicy while Australia coach Justin Langer expects a dry and flat surface. The surface had quite a bit of grass on it which is expected to be shaved off but history suggests Lord’s, especially the opening day tends to do a bit for the fast bowlers.

If England have Archer, Australia too have added to their arsenal Mitchell Starc and Hazlewood in their XII. One of them is a definite inclusion in place of James Pattinson, who has been rested. Hazlewood took 3/34 and Starc 2/56 during the three-day practice match between Australians and Worcestershire and even though Hazlewood expressed his desire to gain from Lord’s juice surface, the inclination might be towards Starc by just that much.

On July 14, England witnessed their biggest cricketing moment when they lifted the World Cup trophy. Exactly one month later, they return to the same venue, yet again with a point to prove.

Weather: Typical English weather, with partly cloudy and spells of rains expected on Day 3 and 4.

England’s XI picks itself. Injured Anderson goes out and Archer the X-factor comes in. Leach replacing Ali seems to be the only other change with Sam Curran likely to be benched again.

Peter Siddle didn’t do badly, scoring 44 and claiming 2/28, but might go out for Australia to unleash their three-star pace attack comprising Cummins, Starc and Hazlewood. Under overcast skies, who wouldn’t fancy that?

– 10 years removed from his Test debut, Tim Paine returns to Lord’s for the first time. Another player made his debut for Australia in that game the man Paine succeeded to become Australia’s captain, Smith 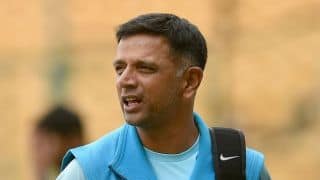 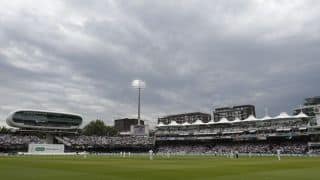