With England having a number of problems to troubleshoot, can the hosts give something to their fans to cheer or will Australia register their first Ashes triumph in England in 18 years.

After retaining the urn in an emphatic manner in the fourth Ashes Test at Manchester, Australia will be hungry to create history and seal their first Ashes series win in England since 2001 as the tourists look to inflict more pain on England in the fifth and final match at the Oval on Thursday.

Tim Paine‘s men saw off the ICC World Cup 2019 champions at Old Trafford on Sunday to take a 2-1 lead in the five-Test series.

In their bid to salvage some pride and give coach Trevor Bayliss a fitting farewell, England have to find a way to stop the Steve Smith juggernaut.

The former Australia captain has been phenomenal on Test return. He has scored 671 runs in just five innings at an astonishing average of more than 134.

However, David Warner‘s form remains an issue. The left-handed batsman has been in awful form scoring just 79 runs. Add to that, Warner has struggled to find an answer to the new ball, particularly against Stuart Broad. He has managed just one double-figure score (61) in eight innings with ducks from each of his last three starts.

Another key element that has helped Australia in the series has been their bowling attack. Josh Hazlewood and Pat Cummins have pocketed 42 wickets between them.

England’s story in contrast is unworthy of praise and it starts with the captain Joe Root, who has been off colour in comparison to his own standards. Barring his 71 in Manchester (4th Test), 77 at Leeds (3rd Test) and 57 at Birmingham (1st Test), Root has failed to convert his starts. His leadership abilities too have come under the scanner with many England legends, including Geoffrey Boycott questioning his captaincy.

Adding to England’s woes has been Ben Stokes‘ shoulder injury. The England vice-captain captain did not bowl in Australia’s second innings at Old Trafford. He has been the only batsman who could offer some resistance to Australia’s potent attack. Stokes, England’s top-scorer in the series, has notched up 354 including two centuries.

With England having a number of problems to troubleshoot, can the hosts give something to their fans to cheer or will Australia register their first Ashes triumph in England in 18 years?

Weather: Party cloudy with a maximum high of 24 degrees Celsius

On TV: SONY Network (in India)

You can also follow LIVE coverage of the match on CricketCountry (5th Ashes Test, England vs Australia: SCORECARD)

Australia are likely to stand by the other opening batsman Warner despite paltry returns. Coach Justin Langer has hinted Cummins may be rested for the final match following his marathon four months, which means that either Peter Sidle or James Pattinson will make the cut.

The hosts have decided not to make any changes in their line-up and have named an unchanged 12-man squad for the Test. If Stokes is unfit to bowl, he may play the role of a specialist batsman which means that either Sam Curran or Chris Woakes would come into the side and one of the batsmen would make way, perhaps Jason Roy. Root will have to continue relying on his new-ball bowling pair of Broad and Jofra Archer to create early inroads.

— Smith needs 304 runs to surpass Don Bradman’s (974 runs) 89-year record, the highest ever by a cricketer in a Test series.

— If Australia avoid defeat at the Oval, then Paine will join the list of Australia captains who have led the team to an Ashes series win in England. It is a feat no Australia captain has achieved since Steve Waugh oversaw a 4-1 success 18 years ago.

“You’ve still got to perform whether you’re young or you’re a veteran, but we also have to recognise they are young batsmen and it’s a really tough school and hopefully they’ll come through at some point.” — Australia coach Justin Langer

“Everyone goes through periods where they don’t score as many runs as they’d like. I think the Australian team have bowled pretty well to Joe Root.” — England coach Trevor Bayliss 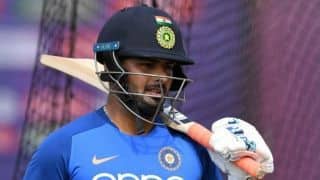 Rishabh Pant taking 'one match at a time'