Ashes 2019: Desperate to take this team forward, says Joe Root as he sets sights on winning Ashes in Austr

England won at The Oval by 135 runs in the fifth and final Ashes Test to tie the series at 2-2, ending their historic World Cup-winning season on a high.

Captain Joe Root put the focus firmly on winning the Ashes in Australia after England levelled their home series on Sunday, saying he was “desperate” to take the team forward.

England won at The Oval by 135 runs in the fifth and final Ashes Test to tie the series at 2-2, ending their historic World Cup-winning season on a high.

It meant the series finished in a draw for the first time since 1972, although holders Australia retain the urn. Root described the summer as “a huge success for English cricket” after their World Cup triumph in July.

He said the foundations were in place for England to build on, praising Rory Burns for his contributions at the top of the order and paceman Jofra Archer, who only made his Test debut last month.

“Throughout the whole series we’ve shown a lot of character,” said Root, who described 2-2 as a fair result.

“At times we’ve been out-skilled… but we’ve always fought very hard and that’s a very pleasing thing,” he said. “Hopefully that will be a massive stepping stone and starting point for us to really kick on as a team now.”

The Ashes will next take place in Australia in 2021-22 and Root said he was “in it for the long haul”. “I’m desperate to take this team forward,” said the skipper. “I’m in a very privileged position to be captain of the Test team and I’ll do everything I can to get us very well prepared for going down there and hopefully doing something very special.”

Root said the performance in the fifth Test was a “blueprint” of how he wanted his team to play but there was still room for improvement.

“You look at this week in particular,” he said. “It looks as like we just started to really get to grips with Test cricket after a very long period of one-day cricket.

“We’ve got a period now and an opportunity in the next two-and-a-half years to really push and do everything we can to prepare extremely well for that tour of Australia so that’s going to be a huge focus for me and I like to hope for English cricket.” 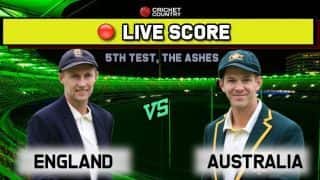 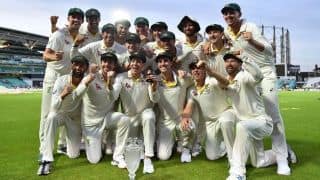