England added 16 runs to their overnight score of 313 as Pat Cummins and Nathan Lyon dismissed Archer and Leach respectively to end England innings.

England were bowled out for 329 on the fourth day of the fifth Test on Sunday, setting Australia 399 to win an Ashes series away from home for the first time since 2001.

Joe Root’s side resumed on 313-8 at the Oval but quickly lost Jofra Archer, caught behind by Australia captain and wicketkeeper Tim Paine off the bowling of paceman Pat Cummins.

Archer chased a ball down the leg-side and it was initially given not out but the umpire overturned the decision after Paine’s appeal.

Last man Stuart Broad entertained the crowd with a couple of lusty blows into the stands off Cummins.

But the innings ended in tame fashion when Jack Leach mistimed a sweep and was caught by Josh Hazlewood off the bowling of off-spinner Nathan Lyon.

Earlier on Saturday, opener Joe Denly and Ben Stokes, playing as a specialist batsman, put on 127 for the third wicket as a tiring Australia attack ran out of steam in the September sunshine.

Off-spinner Lyon bowled Stokes after tea for 67 with a beautiful delivery that spun past the left-hander’s forward defensive shot while seamer Peter Siddle had Denly caught at slip for a Test-best 94 shortly afterwards.

Bairstow was caught by Steve Smith in the slips off the bowling of all-rounder Mitchell Marsh for 14 to give Australia a glimmer of hope.

But they missed a big opportunity when, in the next over, they failed to review a not-out decision against Buttler after an appeal for lbw, with replays showing Lyon’s ball would have hit the stumps.

It was the second time that Australia had proved over-cautious. Denly should have been out lbw earlier on 54 but Australia skipper Tim Paine opted not to review.

Stokes, dropped on seven by Smith, started his innings slowly but accelerated, reaching his fifty off 89 balls with a huge six off leg-spinner Marcus Labuschagne over wide long-on.

The batsman is second only to Smith in the combined run-scoring charts over the series, albeit more than 300 runs adrift of the Australian’s total of 751.

Denly looked increasingly confident as his innings progressed, finding the boundary regularly as the tourists’ spirits drooped but fell agonisingly short of his first Test century.

Wickets fell at regular intervals in the final session, with Smith pulling of a phenomenal diving catch at second slip to remove Chris Woakes off the bowling of Marsh. 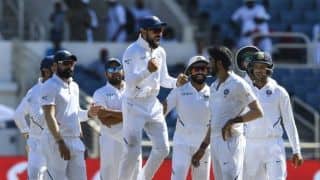 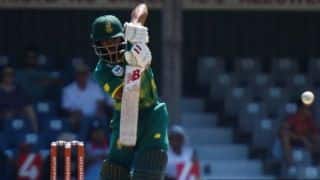