Roy's form has seen him demoted down the order for the ongoing fourth Test at Old Trafford, with Joe Denly replacing him as Rory Burns' partner.

Jason Roy‘s foray into Test cricket has not been that enterprising as his knocks in ODIs. The Surrey opener has made just 57 runs in the Ashes 2019 so far, including a torrid match in the second Test at Lord’s in which he managed just two runs in his two innings.

Roy’s form has seen him demoted down the order for the ongoing fourth Test at Old Trafford, with Joe Denly replacing him as Rory Burns‘ partner. While the World Cup hero admits it has been a frustrating period for him, he hopes a move down the order will result in an upturn in form.

“On a personal note, my form has been quite frustrating. I knew that opening the batting in Test cricket was going to be completely different to one-day cricket, but I have found it really difficult,” Roy wrote in his column for Sky Sports.

“Coming straight into the Test arena off the back of the World Cup feeling mentally and physically drained I have been trying to learn on the job and work out my method while playing.

“I have been going out to bat, facing a few balls and thinking, ‘This is working’ and then I’ll get a good ball, or a drive ball that I nick, and you have to start all over again next innings.

“People have made their conclusions, saying, ‘He’s not a Test player’ and this sort of stuff. I think I am and can be and so moving to down the order to No4 for this Test, mentally, it’s a lot more comforting. You get a bit more time to ease into an innings.

“That’s not to say it’s going to be easy. This is comfortably the best attack I’ve ever faced. They have a relentless group of tall, fast bowlers, who all operate at or close to 90mph. They are so consistent, they don’t seem to ever miss their areas.”

Australia and the rain hogged most of the spotlight on the opening day at Manchester. Steve Smith, back after missing the Third Test due to concussion after being hit on the neck in the Second Test, continued to frustrate England.

Despite receiving criticism for the manner of his dismissals, Roy is confident he can adopt the right approach. “The second innings at Headingley is 100 per cent our template going forward,” he said.

“In an ideal world, you’d want one or more of our batsmen to go big with Stokesy, to push for the big 400, 450-plus totals and it would be amazing if I could contribute and get a big score in these next two Tests. We don’t want Stokesy’s effort at Headingley to be for nothing.” 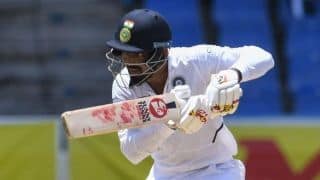