Root wants to keep the England captaincy despite falling to regain the Ashes at home.

Joe Root is in no doubt he should remain as England‘s Test captain despite presiding over their first failure to win a home Ashes series in 18 years.

England were looking to regain the Ashes after a humiliating 4-0 loss under Root in Australia in 2017/18. But Australia‘s 185-run victory in the fourth Test at Old Trafford on Sunday left them with an unassailable 2-1 lead in the five-match series ahead of next week’s finale at the Oval.

Root, whose tactical acumen has been questioned this series, may be England’s best batsman but three of his last five Test innings have ended in ducks.

Nevertheless, he had no doubts about continuing in the often stressful role of England captain.

“Definitely, yes,” the 28-year-old said when asked if he still felt he was the right man for the job. “Whenever you lose a series it hurts and I have to take that on the chin. It’s still very raw.

“You have to look at areas you want to get better at, both in yourself and as a team. But I have been given a fantastic opportunity to captain the Test side and will continue to work very hard doing my best at that. That is in my control and I have to make sure I keep getting this team in the best shape to win as many games as possible.”

This was England’s first defeat in an Old Trafford Test since 2001 and Root, one of several players also involved in this season’s World Cup triumph, has little time in which to revive flagging spirits ahead of Thursday’s start at The Oval.

England, however, could still end this series all square at 2-2 and gain valuable points in the inaugural World Test Championship with a victory in south London.

“I know the Ashes are not coming home but in terms of the Test championship, at the end of the two-year cycle those points could be crucial. Every game against Australia matters.” 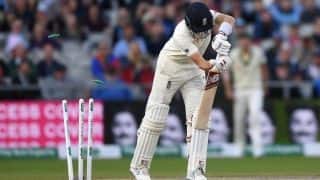