Smith was batting with a stem guard neck protector on his helmet despite previously saying he felt uncomfortable using one.

Australia star Steve Smith was out for just 23 in his first innings since being felled by England fast bowler Jofra Archer and suffering concussion in the second Ashes Test.

Smith took to the crease in the three-day tour game at Derby on Friday, coming in with Australia 179-2 in reply to Derbyshire‘s first innings 172.

He played his opening ball from Hamidullah Qadri defensively and later slogged the off-spinner for four.

But his 38-ball knock came to an end when he sliced a drive off Matt Critchley, a leg-spinner whose previous 59 first-class wickets had come at an expensive average of 51.86. Qadri, running in from the cover boundary, held a well-judged catch.

Australia were then 237-3 in the 70th over. Smith, who was in the middle for 47 minutes, faced 38 balls and struck two fours. But the only five balls he faced that weren’t from a slow bowler came from medium-pacer Anuj Dal.

Smith kept his pads on after walking back into the pavilion and soon afterwards headed into the nets in the company of Australia opener David Warner, not playing against Derbyshire. Warner, using the ‘dog-thrower’ device to simulate fast bowling, sent down deliveries to Smith.

This was former Australia captain Smith’s first match since being hit on his unprotected neck by a 92 mph bouncer from Archer during the drawn second Test at Lord’s.

But against Derbyshire he was batting with a stem guard neck protector on his helmet despite previously saying he felt uncomfortable using one.

His concussion injury meant Smith missed England’s dramatic one-wicket win in the third Test at Headingley. But he is now set to return for next week’s fourth Test at Old Trafford, with the five-match Ashes series all square at 1-1.

The absence of Smith was a huge blow to Australia given their former captain’s sparkling form in his first Test series since completing a 12-month ban for ball-tampering.

Smith scored two centuries — 144 and 142 — in Australia’s 251-run win in the first Test and 92 at Lord’s. Marnus Labuschagne took over as international cricket’s first concussion substitute at Lord’s and went on to make 74 and 80 at Headingley. 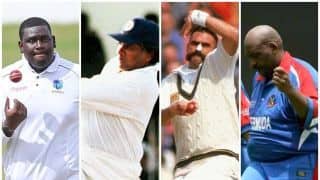 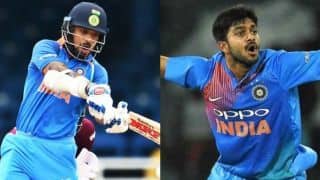