England won the final Ashes Test on Sunday to level the five-match series against Australia at 2-2, with the tourists retaining the urn.

England won the final Ashes Test on Sunday to level the five-match series against Australia at 2-2, with the tourists retaining the urn.

Here, AFP Sport looks at what we have learned from the contest:

Steve Smith in a class of his own

Steve Smith batted on a different level from everybody else during the Ashes, scoring 774 runs in just seven innings at an average of more than 110.

Had he not missed three innings after being hit by a Jofra Archer bouncer, he might have got near Sir Donald Bradman’s all-time record of 974 runs in a Test series, set in 1930.

Smith scored two big centuries in the first Test at Edgbaston and a double-century at Old Trafford, with Australia winning both of those matches.

Sunday marked the first time he had been dismissed for less than 80 during the series.

The former captain has made a triumphant return to international cricket after a ban for his role in a ball-tampering scandal and is out on his own at the top of the Test rankings.

Ben Stokes has become a giant figure in English cricket.

The all-rounder was already a national hero after his World Cup exploits, which propelled England to their first-ever victory in the 50-over competition.

ALSO READ: Desperate to take this team forward, says Joe Root as he sets sights on winning Ashes in Australia

But, restored to the position of Test vice-captain, he also produced the magic in the Ashes, hitting two centuries, including a phenomenal match-winning knock of 135 not out at Headingley.

Stokes was played as a specialist batsman in the final Test at the Oval, showing how highly he is valued, and he picked up England’s man-of-the-series award.

With a few notable exceptions the frontline batsmen struggled during the Ashes series.

Smith was the standout performer and Australia’s Marnus Labuschagne also impressed, averaging more than 50 in his seven innings.

But David Warner had a stinker, scoring just 95 runs in 10 innings at a paltry average of 9.5 after an impressive World Cup.

Ben Stokes was the only player to top 400 runs for England but opener Rory Burns boosted his reputation, averaging 39 against Australia’s fearsome quicks.

England captain Joe Root had a poor series by his high standards, averaging 32.5 with three ducks.

Australia can boast two bowlers in the top 10 of the Test rankings in Pat Cummins and Josh Hazlewood and the pair were at the top of their game throughout the series, taking a combined 49 wickets.

With Mitchell Starc and James Pattinson also in the mix, Australia have a pace battery to strike fear into any batting line-up.

England suffered a huge blow when James Anderson was injured in the first Test and could take no further part in the series.

And the pace of Jofra Archer, who touched speeds of 95 miles per hour on Sunday, is a major weapon for England.

Archer took six wickets in Australia’s first innings at the Oval to swing the game England’s way and finished his first series with 22 wickets at an average of just over 20.

The World Cup final ended in the most dramatic way possible, with the one-day showpiece throwing down a gauntlet to the longer form of the game.

But the Ashes also produced many moments of high drama in front of packed crowds at English grounds.

The highlight was England’s phenomenal Stokes-inspired win at Headingley, which put Test cricket firmly back in the public consciousness. 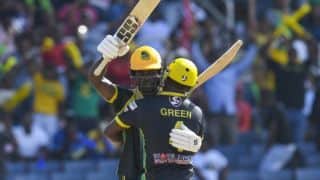