Australia applied for a concussion substitute and Marnus Labuschagne is approved as Smith's replacement.

Hit by a Jofra Archer on Day four of the second Ashes Test at the Lord’s Cricket Ground, Australia‘s Steve Smith on Sunday was ruled out of the remainder of the Test and in doubt to feature in the third Test, which commences next week at Leeds.

Ranjan Madugalle, match referee, approved Australia’s application for a concussion substitution and Marnus Labuschagne, who can bat and take field, will take Smith’s place. This will be the first time when a concussion sub will take place since the introduction of the rule.

“Marnus Labuschagne has been approved as his replacement after Australia successfully applied for a concussion substitute,” said a report on cricket.com.au

“Smith has suffered a delayed concussion in response to the blow on the back of the neck by a rapid Jofra Archer bouncer after lunch on Saturday,” added the report.

“Smith passed a series of concussion tests after the incident and resumed his innings, but woke this morning with a “bit of a headache and a feeling of grogginess”,the report concluded.

Smith, batting on 80, was hit on the neck by a searing Archer bouncer. The well-set batsman took off his helmet was laying on the ground looking in considerable pain.

Few England fielders and non-striker Pat Cummins rushed forward to attend him before Australia doctor convinced Smith to go off the field as a precautionary measure.

“I was saying to the guys yesterday I don’t think I have ever seen him get out of his own accord! I just tried to get him rattled. I just wanted to get him out,” Archer told Sky Sports after day four’s play on Saturday.

When quizzed about his thoughts on seeing Smith lying on the ground after the sickening blow, Archer replied, “I don’t know what I was thinking at the time. You don’t ever want to see [someone get hurt] or missing a day or another game, especially after what happened a few years ago [Phillip Hughes]. It’s never a nice sight.”

Smith returned to bat later on and was eventually dismissed on 92. 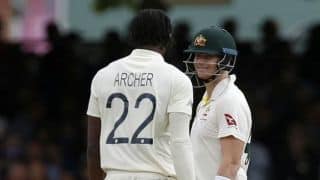 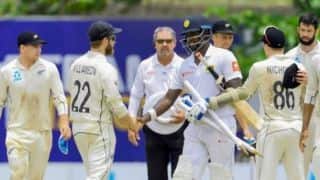