The veteran pacer had sustained a calf injury during the first Ashes Test and did not take any part in the next two Tests before being ruled out of the series.

James Anderson, on Friday, was ruled out of the remainder of the Ashes series. The veteran England pacer, who had sustained a calf injury during the Ashes opener, played two games for Lancashire Second XI in order to get fit for the last two Tests. However, it is now announced that the right-arm pacer will not take any part in the rest of the Ashes.

“England and Lancashire seamer James Anderson has been ruled out for the rest of the Specsavers Ashes series,” said an England and Wales Cricket Board (ECB) in a statement.

“Whilst bowling in the ninth over on Thursday in Lancashire’s second XI four-day friendly against Durham at Chester Boughton Hall Cricket Club, Anderson became aware of right calf pain following on from 20 overs he had bowled on Tuesday,” added ECB.

“He immediately sought a medical assessment from Lancashire and was withdrawn from the remainder of the game. Further review with the ECB medical team has confirmed that he will be unavailable for the remaining two Specsavers Ashes Tests,” concluded ECB.

Anderson was replaced by Jofra Archer in England s playing XI and the World Cup-winning hero made a solid impression scalping as many as 13 wickets, including a six-wicket haul, across two Tests.

While England lost the opening Test, they gave a mighty scare to Australia in the second Test before winning the third Test on the back of a sensational Ben Stokes hundred at Leeds to level the series 1-1, with two Tests to go. 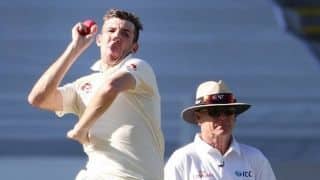