An image of Ashish Nehra and Virat Kohli was doing rounds some back on social media. And Nehra, who was awarding the current Indian Test captain an award when he was young, has said the image got viral only because of Kohli. Nehra is currently out of action after suffering a hamstring injury in game against Kings XI Punjab. He has been a rejuvenated figure, featuring for India in every Twenty20 International (T20I) this year. He was also a key figure for his IPL side Sunrisers Hyderabad, forming a brilliant trio with Mustafizur Rahman and Bhuvaneshwar Kumar. He took 9 wickets from 8 games before suffering the injury. ALSO READ: Virender Sehwag motivates Ashish Nehra after surgery

Speaking about the image which went viral, Nehra said “I’m not on social media but that picture has become popular now because where Virat Kohli is today. Otherwise it was just a picture on the wall and nobody would have admired it. Now that picture belongs to Virat Kohli. This picture was taken some 13 years back. When I was playing in 2009-11 Virat was also playing. Then nobody talked about that picture. It’s all about media and social media,” reported Hindustan Times.

He also spoke about the prospects of Delhi Daredevils sensation Rishabh Pant, and the aggressive nature of Delhi born batsmen. “Pant is a potential no doubt. I have been watching him for the last five years and I always felt he has good potential. If he works hard, he can play for India. And it’s not just about Delhi.

If you see around north India, we have so many aggressive batsmen. There is Suresh Raina from UP, Yuvraj Singh is from Punjab. Every city produces cricketers but yes the last 10-15 years Delhi has been producing good batsmen. Even so many bowlers are coming from Delhi.” ALSO READ: IPL 2016: Ashish Nehra’s knee operation successful

He also revealed being pleased that fast bowlers are getting more praises. “It’s good. In Twenty20 or ODIs, batsmen always get the limelight. Many times do you see a bowler get four overs, 20 runs and one wicket not get a Man of the Match. Instead a batsman who hits a 30-ball 40 gets it.

This time maybe you people are noticing more or maybe IPL is giving more to the bowlers. So it’s a good thing. It’s not only about how good you are batting. Your bowling too has to be good. Maybe it’s late but better late than never.”

Measuring a bowler’s ability by number of wickets he takes is wrong, and he criticized those who do so. “It’s very unfair but who makes it like this? You people! As a cricketer I’m happy as long as the captain and the team management know I’m doing the job. If you are picking two or three wickets, people are noticing more. So many times it has happened someone finishes the IPL with 18 or 20 wickets but he is not even bowling well.

He is picking all his wickets at long-off and long-on. But there are so many bowlers who bowled well but were not amongst the wickets so you guys didn’t even notice. You have to show the right picture. It doesn’t make a difference to me now. You asked me that question that’s why I am saying all this.”

Nehra also revealed a combination of four pace bowlers can work in India, just like SRH were making it work. “As long as the bowling unit is good, you can play four fast bowlers even in India. Mustafizur (Rahman) is a good T20 bowler. We have Bhuvneshwar Kumar who has a good idea of IPL.

He is one of the smartest young Indian bowlers. I rate him very highly. Among all the young Indian bowlers, he comes across as really smart and with a good head on his shoulder. Barinder (Sran) is a good upcoming fast bowler. From here onwards he will learn.”

The 37 year old also spoke about the prospect of having six pacers in a squad. “If you bowl fast you are bound to get injured. It looks easy on TV when someone bowls a bouncer or a yorker but it’s a very physical thing. Unfortunately in India when a pacer is injured, the media shows the wrong side of things. It is not as if only Indian pacers are getting injured. If you see worldwide, Brett Lee or Mitchell Johnson or Dale Steyn everybody gets injured.

It’s because fast bowling isn’t easy. You should ask this question to the selector. In the last 3-4 years when I didn’t play ODIs and T20s, India tried some 20-25 fast bowlers. Rather than trying like this, you should identify your six pacers and go with them. If someone doesn’t deliver obviously you have to go for a change. We have the talent but it’s about how you look after them, how you manage them.

Not one of those to ever be in news, Nehra also revealed why he doesn’t like media attention. “I hardly talk to the media. I believe there is a word called responsibility that the media doesn’t remember. I know every bowler is different, every batsman is different, and every human being is different.

I don’t watch TV so it doesn’t make a difference. But the media should convey the message rightly to the people. I have a feeling that media doesn’t show the right picture at times. Now Ashish Nehra is doing well. ‘He is 37. T20 is such a fast format and still he is doing well’. So everybody is talking well. The day Ashish Nehra gets injured everybody will say ‘he gets injured’.

I know I have had injuries. Sometimes I got freak injuries also. It’s not that Ashish Nehra goes to the ground and every game drops four catches and misses ten boundaries. That’s a perception. And who creates that perception? People are entitled to improve. There shouldn’t be any stamp that this guy bowls well, this guy doesn’t.

Like Rishabh Pant. Right now he is a very good youngster but that doesn’t mean he will play 100 Tests for India. But there is a possibility he might even play 150. People are now talking about Ashish Nehra but there were three years when he was doing well and India were trying 25 fast bowlers then nobody talked about Ashish Nehra. This is not the first time I am doing well. I have done well in IPL and Champions League in the past.”

Finally, he spoke about the disappointments and happiness of 2003 ICC World Cup and 2011 ICC World Cup. “The 2003 loss was a disappointment but we lost to a better team. We lost two games in that World Cup and both of them were against Australia. And they were playing really well. Obviously I regret missing the 2011 final but the good thing is that at least I am happy that India won the World Cup. I had an on-field injury so I couldn’t help it.” 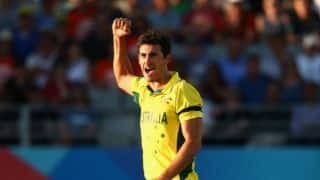