India put in an excellent all-round display to flay Bangladesh by 45 runs in the opening Twenty20 International (T20I) of Asia Cup 2016 at Dhaka.

India put in an excellent all-round display to flay Bangladesh by 45 runs in the opening Twenty20 International (T20I) of Asia Cup 2016 at Dhaka. Ashish Nehra wrecked Bangladesh with a three-wicket spell, but it was a consolidated bowling performance from India that ensured the hosts were never even in with a sniff in their 167-run chase. It was not all smooth sailing for India though. Batting first, India were precariously placed at 52 for 3 after 10 overs, before Rohit Sharma scored a scintillating 83 to lead India to a match-winning total. Rohit was ably aided by Hardik Pandya, who showed once again that he could play some massive shots lower down the order. Full Cricket Scorecard: India vs Bangladesh, Asia Cup T20 2016, Match 1 at Dhaka

Nehra made excellent use of the same early movement that hampered India in their innings. His first three overs cost a mere 17 runs and yielded the wicket of Mohammad Mithun as well. Jasprit Bumrah was excellent at the other end as well, taking the wicket of Soumya Sarkar and going for only 14 in his first 3 overs. Sarkar was caught by Dhoni off a short ball from Bumrah, while Mithun was cleaned up by Nehra. Full Cricket Blog: India vs Bangladesh, Asia Cup T20 2016, Match 1 at Dhaka

Shakib Al Hasan continued his disappointing run of form, getting involved in a run out with Sabbir and falling for 3. Mahmudullah hit one from Nehra to Rohit, and Mashrafe Mortaza hit one to Jadeja first ball. Mushfiqur Rahim and Taskin Ahmed merely carried out the formality of batting through the overs as India won by a convincing 45 runs. READ: India vs Bangladesh, Asia Cup T20 2016, 1st T20I at Dhaka: Highlights

Earlier, Rohit gave an exhibition of the highest quality of batting en route to scoring a sublime 83 off 55 balls as India reached a challenging 166 for 6 against Bangladesh. He was aided by a thrilling cameo from the impressive Hardik Pandya, who came in and smashed 31 off 18 balls from No. 6 batting ahead of MS Dhoni. Mashrafe Mortaza won the toss and put India in to bat on a green pitch under overcast conditions. Bangladesh went in with as many as four pacers, while India were mostly unchanged from their team that played the T20Is against Sri Lanka recently. Bangladesh got off to a terrific start with their pace bowlers keeping things tight and getting enough movement off the pitch to keep the Indian openers on their toes. READ: India vs Bangladesh Asia Cup 2016: Strategy of green-top wicket backfires for Bangladesh

The in-form Shikhar Dhawan was the first to go, getting bowled by a terrific delivery from the returning Al-Amin Hossain. It was pitched up and seamed in just enough to beat Dhawan’s inside edge. Virat Kohli, returning to the side after being rested for the T20Is against Sri Lanka, was in sensational form in Australia but looked quite rusty this time around. Kohli repeately tried to hit out against Mustafizur Rahman and the others before holing out to Mahmudullah in Mashrafe Mortaza’s first over. Kohli tried to go over mid off, but could not get it past the fielder. READ: VVS Laxman: Asia Cup ideal dress-rehearsal for ICC World T20 2016

Suresh Raina came in at No. 4 and injected a bit of life in India’s sagging innings. Raina hit a couple of boundaries but was guilty of trying too hard and eventually paid the price. Raina stepped out once too often and ended up getting bowled by Mahmudullah for a run-a-ball 13. Yuvraj Singh was watchful early, but made sure he kept the singles coming off virtually every ball. He became the fourth Indian to score 1,000 T20I runs when he reached 7, joining Suresh Raina, Virat Kohli, and Rohit Sharma. Unfortunately for him, the first ball he really timed well was hit straight to the fielder at deep midwicket. Yuvraj’s1 6-ball 15 was a small but important contribution to India’s total. READ: Yuvraj Singh becomes 4th Indian to score 1,000 T20I runs

Yuvraj’s dismissal was a turning point in the match, but not in the way Bangladesh would have wanted. New man Hardik started hitting the ball cleanly from the start, and in his company Rohit went from strength to strength. Rohit was dropped by Shakib Al Hasan off Taskin Ahmed when he was on 21 off 28 balls. He followed that up with 4, 6, 4, and never looked back thereafter. Rohit then took on Mortaza in the 16th over, hitting him for a six and two fours off successive deliveries before Pandya took over. Mustafizur was smashed for a four and two sixes by Pandya, and Al-Amin was then hit for two more boundaries by Pandya.

Bangladesh came back brilliantly in the last two overs of the innings, with Mustafizur giving away only 7 runs in the 19th over and Al-Amin taking two wickets and conceding a mere 9 runs in the 20th over of the innings. However, India would have happily accepted a score of 166 for 6 given that they were meandering at 52 for 3 at the end of the 10th over. 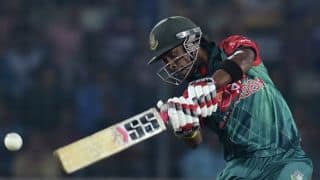 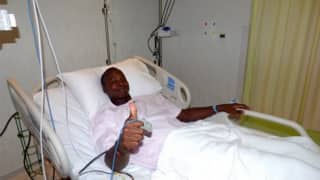 Zimbabwe cricketer struck on head during warm-up match in Sharjah