"We have been outplayed, that's the truth."

Australia‘s Ashton Agar  has warned only the team’s “absolute best” will be good enough to deny England a first 5-0 one-day international series whitewash of their arch-rivals. But the left-arm spinner insisted Australia “have no choice (but) to believe” they can beat top-ranked England in the fifth and final ODI at Old Trafford on Sunday. “It’s going to be tough, but I absolutely believe we can beat them: we have no choice (but) to believe that we can beat them,” Agar told reporters at the Manchester ground on Saturday.

“But we need to play our very best cricket against a side that’s played really well four games in a row. We have to bring our absolute best,” he added.

Meanwhile the 24-year-old, half of whose eight ODI appearances have come during this series, admitted: “We have been outplayed, that’s the truth. All we can do now is focus on us and look to improve in every area possible — batting, bowling, fielding, cricket smarts.” England, who beat Australia 4-0 in a five-match home one-day series, with one washout, in 2012, posted a men’s world record ODI total of 481 for six on during a 242-run victory in the third match of the current campaign at Trent Bridge in Nottingham on Tuesday.

Agar was confident that his Perth Scorchers team-mates Andrew Tye (nine wicketless overs for 100 runs) and Jhye Richardson (three for 92 in 10 overs) would be better pacemen for their mauling in the Midlands.  “They definitely would have been hurt after Trent Bridge. Everyone was,” Agar recalled.  “That was pretty incredible, it was a world record and unfortunately we were on the receiving end.”

“But we have to keep learning from those experiences and it’s good to experience that now and not in a World Cup.” Amid all the blazing hitting at Trent Bridge, Agar emerged relatively unscathed with figures of one for 70 in 10 overs. “I was proud of the way I tried to fight back during that spell and tried to keep my cool,” he said.

Australia arrived in England without banned star batsmen Steven Smith and David Warner, the former captain and his deputy given year-long suspensions for their roles in the Cape Town ball-tampering fiasco in March. Meanwhile Ashes-winning fast bowlers Mitchell Starc, Pat Cummins and Josh Hazlewood are all injured, as is all-rounder Mitchell Marsh.

But the truth is world champions Australia’s struggles in ODI cricket predate these absences, with Thursday’ssix-wicket loss to England at Chester-le-Street their 15th defeat in 17 completed matches at this level. Agar, asked what had impressed him most about 2019 World Cup hosts England in this format, replied: “Their confidence, their self-belief: they ooze it out there, no doubt.

“They are playing like a team where everyone knows their role and they back themselves and each other to just go and do it. They have set the benchmark, no doubt.” The recent run of huge ODI scores has led even former batsmen such as India’s Sachin Tendulkar and England’s Michael Atherton to call for an end to using two white balls per innings in this format, the pair insisting this was denying pace bowlers the chance to gain reverse swing.

Agar also highlighted the problem of having just four fielders outside the fielding circle in the second powerplay of an ODI.”With four fielders out, it makes it really hard,” he said. “It’s probably easier to cut the boundaries in Twenty20 cricket sometimes when you have five out, then it is in one-day cricket when you have four out, especially when batters have evolved so much to hit 360 (degrees). “If batters can reverse-sweep and sweep you, well you have to protect spare boundaries, but you are trying to get them to hit down the ground so what do you do?  “They are scoring off your best balls all the time.” 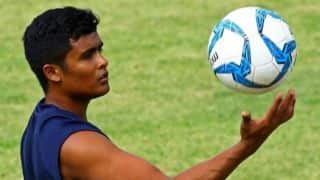