India may have outclassed Pakistan by eight wickets on Wednesday in the league stage but Prasad feels Sunday's contest will be nothing like the previous encounter.

Former India fast bowler Venkatesh Prasad has predicted India and Pakistan to play out a far more competitive game on Sunday as compared to the lopsided affair that took place on September 19. India may have outclassed Pakistan by eight wickets on Wednesday in the league stage of the 2018 Asia Cup but Prasad feels Sunday’s contest will be nothing like the previous encounter.

“The first India-Pakistan encounter in the Asia Cup may have turned out to be a lopsided affair, but the script of the second meeting the Super 4 contest on Sunday may well be an exciting one which could go down to the wire,” Prasad wrote in Sunday’s Times of India.

India have regrouped well since avoiding a scare at the hands of Hong Kong in their Asia Cup opener but have since demolished Pakistan and Bangladesh (in the Super 4) by eight and seven wickets. Their five-bowler theory two pacers and three spinners has worked well for Rohit Sharma and Co. and India will be expected to go ahead with the same attack. Pakistan, on the other hand will be looking to avoid a repeat of the previous game, although a lot depends on how their batting fares.

“Coming off a crushing Test series loss in England and the rusty show against Hong Kong in their tournament opener, India have regrouped admirably in all departments. Bhuvneshwar Kumar and Jasprit Bumrah in the pace department and Yuzvendra Chahal, Kuldeep Yadav and Kedar Jadhav on the spin front have complemented the firing batting unit,” Prasad, who represented India in 33 Tests and 161 ODIs, said.

“Against Bangladesh, it was heartening to see the return of Ravindra Jadeja to one-day Internationals after more than a year. I m not surprised by his form because I ve always believed Jadeja is better suited to the shorter format of the game.

“On the other hand, Pakistan may have won the match against Afghanistan, but not before they were stretched to the last over. It took the experience of Shoaib Malik for them to cross the finish line.

In addition to their batting, Pakistan will hope their spinner Shadab Khan to recover in time. The 19-year-old leg-spinning allrounder missed the previous game and was replaced by Haris Sohail. However, reports have surfaced that Shadab should be fit in time for the India game, which will be a big boost to Sarfraz Ahmed and Co.

“Against India, they will hope for legspinner and allrounder Shadab Khan to be fit in time for the match. In the previous match between the two sides, the youngster foxed India s in-form skipper Rohit Sharma with his googly but had to be rested for Friday s match against Afghanistan,” he said.

Prasad stressed on the importance of Pakistan batsmen coming to the fore. In the last match between the two sides, barring one partnership between Shoaib Malik and Babar Azam that yielded 82 runs, Pakistan struggled for partnerships. If they are to beat India, the batting is needed to push India and their bowlers.

“For Pakistan to push India, it is important for the batsmen to occupy the crease for a long period, build partnerships and convert the starts. If they bat first, there has to be at least 280 runs on the board for the bowlers to defend. Although batting first is a challenge in the Dubai conditions, Pakistan may prefer to considering they are not the best chasers,” added Prasad.

The match starts at 1700 IST at the Dubai International Stadium. 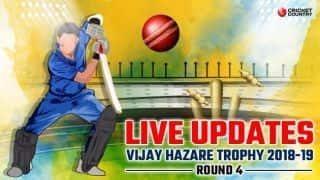