Key to his success, and subsequently the team s, was how Mahmudullah played the legspinner Rashid Khan.

The allrounder Mahmudullah was once again left to reflect on a match-winning ODI innings for Bangladesh which turned a hopeless position into one from where they went on to claim a narrow win that kept them alive in the 2018 Asia Cup.

On Sunday in Abu Dhabi, having walked in to bat lower than usual at No 8, following two sloppy run-outs that left Bangladesh 87/5, Mahmudullah made 74 off 81 balls to help the score to 249/7, which thanks to Mustafizur Rahman s nerveless final over proved three runs out of Afghanistan s grasp.

This added to a credible list of ODI scores in wins for Bangladesh which includes a famous unbeaten 102 to take Bangladesh into the knockouts of the 2017 ICC Champions Trophy, a World Cup century against England in 2015, another 75 off 88 balls to set up victory over England in 2016 and, before Sunday, a vital 67* in a must-win ODI in the West Indies that helped seal the series in July.

Asked after the match whether he thrived in being Bangladesh s man for a crisis, Mahmudullah said: “Yes, I do. The pressure gives me the opportunity to get into my rhythm and give back to my team as well. Pressure will always be there and we just need to find out ways to handle it, that’s all.”

Key to his success, and subsequently the team s, was how Mahmudullah and Imrul Kayes, who on comeback to the side made a vital unbeaten 72, played the legspinner Rashid Khan. Initially he was content to nudge Rashid around for singles after the damage had been done inside 21 overs, but as he gained in confidence Mahmudullah swung him for two sixes.

“I didn’t work too much, he said. We played three times in four days, so there wasn’t much time to think. I was just playing with an empty mind. We all know that Rashid Khan is one of the best strike bowlers around the world. That does not mean however that he is unplayable. In our partnership, our plan was to not give Rashid our wicket. We dug deep and we saw it through till the end.”

The win was not possible without Mustafizur, who defended eight runs and removed the dangerous Rashid off the second ball of the final over. This, according to Mahmudullah, was more important than his innings.

“I give special credit to Mustafizur because he was struggling with a hamstring problem. I would say Mustafizur’s last over [was more important] because although our partnership was important, defending eight off six balls is not that easy,” he said. 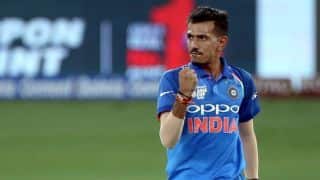