A measured half-century from Rahmat Shah took Afghanistan to a decent 250 against Sri Lanka in the third match of the Asia Cup 2018 at the Sheikh Zayed Stadium on Monday.

A measured half-century from Rahmat Shah took Afghanistan to a decent 249 against Sri Lanka in the third match of the Asia Cup 2018 at the Sheikh Zayed Stadium on Monday.

Openers Mohammad Shahzad and Ihsanullah Janat laid a solid platform after Afghanistan captain Asghar Afghan opted to bat in sweltering conditions. Shahzad was his usual self – taking on the new-ball bowlers Lasith Malinga and Dushmantha Chameera. He set the ball rolling in the very first over, flashing hard at a Malinga delivery that flew through the slip cordon for a four.

He then became more adventurous, upper-cutting Malinga off consecutive deliveries. The first went past a diving Akila Dananjaya at third man for a four and the second, an action replay of the first shot, dropped inches short of the same fielder, resulting in a single. However, captain Asghar wasn’t impressed with the theatrics.

Soon, he stepped out to the returning Dananjaya for the first six of the match but was trapped lbw in the same over on 34. Ihsanullah, though, was patient and then together with Rahmat kept the scoreboard ticking, not allowing Sri Lanka any opening.

Ihsanullah looked set for a fifty but Dananjaya, again, provided the breakthrough removing him on 45. Afghanistan lost Asghar (1) cheaply but Hashmatullah Shahidi joind Rahmat in frustrating the Sri Lankans further.

Rahmat went on to complete his half-century – his 12th in the format – reaching the landmark with a boundary. He fell after scoring 72 off 90 with five fours in it.

Thisara Perera then triggered a slide as Sri Lanka pulled things back in the death overs. From 190/3, Afghanistan slipped to 227/7.

Perera got rid of three batsmen in the final over of the innings as Afghanistan were bowled out for 249 and thus completed his fourth five-wicket haul on ODIs. 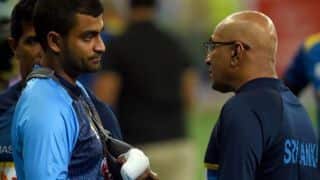