Saeed Ajmal has urged the team to portray better application when it faces India in the Asia Cup Super-4 match on Sunday.

Speaking to Hindustan Times, Ajmal reckons India have adapted better to conditions in Dubai than the home team, terming it a major factor behind the team’s unbeaten run so far in the tournament.

“With Hardik Pandya being injured, Ravindra Jadeja came in against Bangladesh and look how well he adapted,” Ajmal said. “The allrounder starts off with four wickets in the game. This is what makes you sit up and take note. If you notice, India haven t looked to play attacking cricket with bat in hand. They have waited to launch an onslaught and have kept wickets in hand. The openers have given the team a good start in all the games. Rohit has been top-class both with bat and as captain. And now you have an MS Dhoni who looked in good form against Bangladesh.

“If you come to the bowling attack, you have Jasprit Bumrah who has been exceptional. Then you have someone like Bhuvneshwar Kumar. Bhuvneshwar can bowl with both the new and old ball. Thanks to these two India’s death bowling has become strong. The spinners have also done an excellent job except for Yuzvendra Chahal.”

Ajmal also understood that India are a far more experienced team than Pakistan.

“They have the experience and if you look at the Pakistan team, you only have a Shoaib Malik who is a senior pro. India on the other hand have 4/5 players who have been in the team for a while now. Yes, Pakistan might have beaten India in the final of the Champions Trophy, but that doesn t take away the fact that India have experience on their side,” he said.

The last time the two sides met, Pakistan batsmen struggled to get going against India and were bowled out for 162. Barring Shoaib Malik and Babar Azam, no batsman showed any resistance. More than anything, the manner in which Pakistan went down has disappointed Ajmal.

“I have just one message for them and that is for them to play positively. They shouldn’t think too far ahead and when you have some quality bowlers in your ranks, you just need to stay positive and look to have the right attitude. In the last game, India won one sided and when the team does that minus Virat Kohli, that is unacceptable. A good contest is what is expected, after that if you lose well bad luck,” said Ajmal.

“Losing with dignity is one thing and getting thrashed is another. I feel that Pakistan have a better bowling attack than India s and it is the batting which let the team down in the last game. If the batsmen can give the bowlers something to play with, things can change. You have to realise that India have the batting to score 300. On the other hand, the Pakistan attack is one which can keep them under check. But, even then, the batsmen have to put at least 250 on the board if they bat first.”

Ajmal believes Pakistan should play at least two frontline spinners against India on Sunday. With Shadab Khan declared fit, the legspinner is set to take his place back ahead of Haris Sohail but if Ajmal believes, Mohammad Nawaz should retain his place in the side so that the two could operate in tandem on the slow and turning surfaces of Dubai.

“If you ask me, I would say Mohammad Nawaz and Shadab Khan should be playing together as spin is the way to go,” he said. “Secondly, the bowlers need the support of the batsmen and Pakistan must score 250 plus as all the teams have managed to do that when it comes to winning games. In this case, they must also remember that India chase really well and if they cannot put at least 250 on the board, the Pakistan bowlers will not have much to do. They should fight till the end and make this a contest that shall be remembered for ages.” 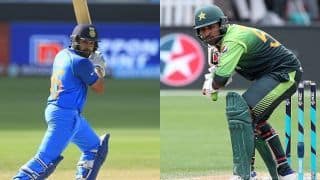 Asia Cup 2018, India vs Pakistan, Super Four, LIVE streaming: Teams, time in IST and where to watch on TV and online in India