Bhuvneshwar began the assault reducing Pakistan to 3/2, after which Jadhav's three wickets in the middle overs pushed Pakistan to a point of no return.

If there were any concerns about India‘s performance after their game against Hong Kong last night, discard them right away. Against Pakistan, they came up with a formidable bowling show, bundling their arch-rivals for 162 in Match 5 of the Asia Cup. Bhuvneshwar Kumar had begun the assault reducing Pakistan to 3/2, after which Kedar Jadhav’s three wickets in the middle overs pushed Pakistan to a point of no return.

Yesterday, it had taken India 34 overs to pick up their first wicket. Here, it took them 13 deliveries. Imam Ul Haq was the first wicket to go down, edging to MS Dhoni, followed by the wicket of the dangerous Fakhar Zaman India’s tormentor from last year’s Champions Trophy final for a nine-ball duck. After five overs, Pakistan were 4/2 with Jasprit Bumrah starting off with consecutive maidens.

Babar Azam and Shoaib Malik then rebuilt the innings with an 82-run stand, the only passage of play that belonged to Pakistan. In between, there were a couple of close chances. Dhoni dropped a tough chance and Bhuvneshwar overran at a chance that was coming straight to him at the deep-midwicket boundary.

Babar has been Pakistan s most standout batsman in the past one year and he used that confidence to give Pakistan a move on. Back-to-back boundaries of Bhuvneshwar settled some nerves, and a deft touch that went towards the third-man fence brought up the fifty for Pakistan. He looked good to get a valuable score before being foxed by a googly from Kuldeep Yadav.

Despite the wicket, Malik was going strong at the other end, concentrating mostly on running between the wickets. But his dismissal triggered the slide for Pakistan. Sending him back required a terrific piece of fielding, which is exactly what Ambati Rayudu delivered. A direct hit and Malik was found wanting. This was the perfect opening for India with both set batsmen back. Rohit Sharma handed the ball to Kedar Jadhav and he responded well.

Jadhav made up for Hardik Pandya s absence, who had to be stretchered off the ground after going down in his follow through. His substitute, Manish Pandey pulled off a stunning catch at the boundary to remove Pakistan captain Sarfraz Ahmed and give Jadhav his first wicket. Pakistan crumbled under pressure, and with the spin trio of Jadhav, Kuldeep and Yuzvendra Chahal bowling in tandem, Pakistan s middle-lower order didn t have much to get away with.

Faheem Ashraf and Mohammad Amir tried to resist towards the end with a 37-run stand. Pakistan would have hoped them to carry in pursuit of 200, but they were exhausted with Bhuvneshwar and Bumrah returning towards the end. Bhuvneshwar removed Faheem to break the stand and Bumrah wrapped up the tail to bowl Pakistan out inside 45 overs. 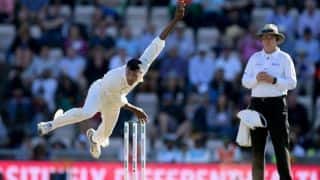 Hardik Pandya is his own cricketer: Lance Klusener