Former England skipper Michael Atherton is highly impressed with Mahendra Singh Dhoni and said his record as India captain speaks a lot about his leadership qualities. 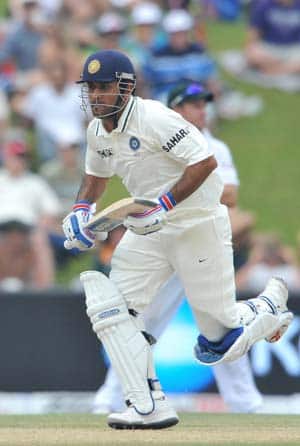 Former England skipper Michael Atherton is highly impressed with Mahendra Singh Dhoni and said his record as India captain speaks a lot about his leadership qualities.

“Dhoni’s record as captain of India, and as captain of the Chennai Super Kings, is remarkable and it marks him out as a leader of surprising and substantial talents. He has led India to the top of the world Test rankings, to the World Cup and inaugural World Twenty20, as well as leading CSK to two Indian Premier League titles and a Champions League crown,” Atherton wrote in his column for The Times.

“In four years, India has been beaten three times in Test cricket, and 15 wins make Dhoni’s win-loss ratio a Test captain up there with the best,” he added.

Atherton made special mention of the match-winning innings that he played in the final of the World Cup against Sri Lanka.

“The defining cricketing image of the year has to be the moment Mahendra Singh Dhoni stepped out of his crease and finished the World Cup with the crispest, cleanest straight drive imaginable. It was the stroke of a man utterly confident in his judgment, as he had been, or at least given the appearance of being, throughout a tournament in which his team and his leadership had been scrutinised by the expectations of a billion people,” he said.

The innings, Atherton went on to say, typified the India captain’s character. “There was an element of risk-taking in the beginning (he had been short of runs during the tournament), a sense of style in the denouement, but most of all a ruthlessness to finish the job,” he said.

Atherton said Dhoni, who endorses the maximum number of brands among all international cricketers, backs his promotions with performances. “With his bottom-handed biffing technique and penchant for stealing the limelight by, for example, riding a motorcycle around the outfield at the conclusion of the Mumbai Test, he looked every inch a Ranchi flash in an Indian pan.”

“No present cricketer does pay more attention or have a less discerning attitude to the bottom line (his website lists 17 global brands that are linked to him) and it was impossible during the World Cup to spend a day without being confronted by an image of Dhoni promoting something or other, but it is hard to argue that he does not back up promotions with performance,” Atherton said.

Pak players to attend conditioning camp ahead of Zimbabwe tour