Australia announced their Test, One-day International (ODI) and Twenty 20 (T20) squad for the upcoming full series against Pakistan in United Arab Emeritus (UAE). Allrounder Mitchell Marsh and left-arm spinner Steve O’Keefe could make their Test debuts next month after both were named in Australia’s Test squad.

Australia will take on Pakistan in a full series in the UAE from October 3, 2014 to November 1, 2014. The bilateral series will start with a lone T20I followed by a three-match ODI series and end with a two-Test series. The two sides will be playing a tour match before the first Test. This series will be hosted at three venues – Sharjah, Abu Dhabi and Dubai. This bilateral fixture was finalised in March 2014.

Phillip Hughes had been included and is expected to battle incumbent No.3 Alex Doolan for a spot in the Test side, while all-rounder Glenn Maxwell had also been picked. Selectors confirmed that Hughes will travel to the UAE earlier than the remainder of his Test teammates to spend time working on his batting against spin with coaching consultant Muthiah Muralidaran.

“Phil has been in excellent form and has been rewarded with a place in the Test squad. His attitude to his game has been first rate and he thoroughly deserves this opportunity.” head selector Rod Marsh said to cricket Australia’s official website, cricket.com.au. Selectors named just three fast-bowlers — Mitchell Johnson, Mitchell Starc and Peter Siddle — for the series that is expected to favour the slower bowlers.

Captain Michael Clarke and allrounder Shane Watson have both been named for the Test and ODI squads and will be aiming to prove their fitness having been ruled out of the recent ODI tour of Zimbabwe. Meanwhile, Aaron Finch will replace George Bailey as Australia’s Twenty20 captain following the Tasmanian’s resignation on Sunday. 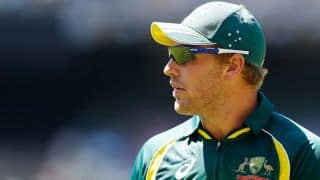