England were bowled out for 245 while chasing the 310-run target, with Eoin Morgan being the last batsman to fall.

Australia took a commanding 2-0 lead in the ongoing five-match One-Day International (ODI) series against England after beating them by a comfortable margin of 64 runs in the second game at Lord’s on Saturday. Australia skipper Steven Smith and Mitchell Marsh starred with the bat with flamboyant half-centuries to guide their side to 309 for 7, while England were bowled out for 245, with Pat Cummins taking 4 for 56 to top the bowling charts. The match was not without its fair share of controversy though, after Ben Stokes was questionably adjudged ‘Obstructing the field’ after appearing to defend himself from a throw by Mitchell Starc. SCORECARD: England vs Australia, 2nd ODI at Lord’s

England were off to a shaky start after losing the wicket of Alex Hales (18 off 20) with just 37 runs on the board after 5.5 overs. Jason Roy hit six boundaries before getting an outside edge to wicketkeeper Matthew Wade off the bowling of Cummins to depart after scoring 31 off 32 balls. James Taylor and skipper Eoin Morgan steadied the English innings thereafter, adding 51 runs for the third wicket before Taylor edged a Marsh delivery to wicketkeeper Matthew Wade to get dismissed for the second consecutive time in the 40s, bringing Ben Stokes to the crease. UPDATES: England vs Australia, 2nd ODI at Lord’s

Stokes was getting settled at the crease when the controversial moment occurred, with Stokes was batting on 10 off 6 balls, including a boundary. Starc threw the ball towards the batsman after Stokes straight-drove the delivery, with the batsman appearing to defend himself from the ball, and his left hand coming in contact with the ball while attempting to duck the object. Whether his hand came in the way deliberately or out of reflex is yet to be established, though the latter looks more likely. TV umpire Joel Wilson however, found Stokes guilty and ruled him out. The New Zealand-born all-rounder walked back with a mix of disappointment and anger, as the crowd began to boo the Australians incessantly. READ: Ben Stokes dismissed ‘Obstructing the field’

England collapsed after that dismissal however, with Jos Buttler getting dismissed for a three-ball duck after getting trapped leg-before off the bowling of Glenn Maxwell, who later took his second wicket when Moeen Ali gave Marsh an easy catch at deep square-leg. Pat Cummins returned to the attack to remove Chris Woakes and Adil Rashid for 6 and 2 respectively. The scorecard read 187 for 8, a hopeless situation for the hosts.

Morgan however, did not give up as yet and decided to keep the fight going along with Liam Plunkett, an able batsman by tail-ender standards. The pair went on to add 48 runs for the next three overs with as many as three sixes and seven fours scored during that period, as the England fans suddenly found hope again after a period of hopelessness. England would have desperately required the pair to stick to the crease, if they were to pull off a miraculous victory. Starc however, returned to the attack and dismissed Plunkett (24 off 12 balls) with a perfect yorker to nearly end England’s hopes. Morgan was the last man to be dismissed,  getting caught by Maxwell at long-off after a brave innings of 85 off 87 deliveries.

Australia finished on a commanding score of 309 for the loss of seven wickets at the end of their innings, with major contributions coming in from skipper Steven Smith (70 off 87), Mitchell Marsh (64 off 31) and George Bailey (54 off 72). The toss was delayed by around 30 minutes due to a brief spell of rain, which caused the umpires and match officials to deduct one over from each team. England put Australia to bat after winning the toss, with skipper Morgan announcing one change for his team — Liam Plunkett coming in for Mark Wood — while Australia retained their winning eleven from the first game at Southampton.

Australian opening batsman David Warner was out retired hurt when he sustained a painful blow to his right thumb while attempting to fend a Steven Finn bouncer. The southpaw was taken off the field immediately after that, and did not field during England’s innings either. Warner was eventually confirmed as ruled out of the series as a result of the injury, with Aaron Finch being named as his official replacement.

Man of the Match: Mitchell Marsh. 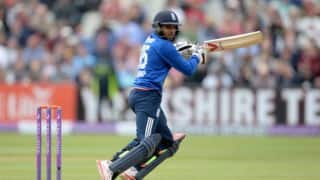 England vs Australia 2015, 2nd ODI at Lord's: Hosts on the verge of defeat after Adil Rashid's dismissal