Stokes became the sixth batsman in ODIs to be given out in the rare manner.

The second One-Day International (ODI) between England and Australia at the Lord’s on Saturday may have witnessed the birth of a new controversy when Ben Stokes suffered a rare dismissal — obstructing the field — while trying to defend himself from a throw from Mitchell Starc aimed at him. Stokes pushed the ball back to the bowler, who threw it back to the striker’s end, with Stokes getting a bit of his left hand while appearing to duck the ball. Starc and the rest of the Australians immediately went for the appeal, with the third umpire shockingly adjudging him out after finding the batsman in question guilty for the same. England lost their fourth wicket with 141 on board as a result of the dismissal, with Stokes becoming the sixth batsman in the history of the format to be adjudged out in that manner. LIVE CRICKET SCORECARD: England vs Australia, 2nd ODI at Lord’s

Stokes was appearing to defend himself from the the incoming ball, which was hurled at him like a missile by Starc. TV umpire Joel Wilson, however, found him guilty of the dismissal and asked umpire Kumar Dharmasena to raise his finger, with Stokes walking back with a mix of anger and disappointment as deafening boos followed.  LIVE CRICKET UPDATES: England vs Australia, 2nd ODI at Lord’s

Five batsman, all of whom are from the subcontinent, have been dismissed in the manner in the past. — Ramiz Raja (1987), Mohinder Amarnath (1989), Inzamam-ul-Haq (2006), Mohammad Hafeez and Anwar Ali (2013), four of whom are Pakistanis. Len Hutton was the only batsman to be adjudged out in that manner in the history of Test cricket, suffering the fate at the Oval against South Africa in 1951. READ: Anwar Ali becomes the fifth player to be dismissed obstructing the field

Australia earlier finished on a commanding score of 309 for the loss of seven wickets, with 96 of those runs coming off the last 10 overs for the loss of four wickets. England won the toss, which was delayed by 30 minutes due to a brief spell of rain that caused an over to be deducted from each team, and put Australia to bat. While the hosts decided to bring Liam Plunkett in place of Mark Wood, Australia decided to stick to their winning eleven from the previous game. READ: Inzamam-ul-Haq dismissed obstructing the field 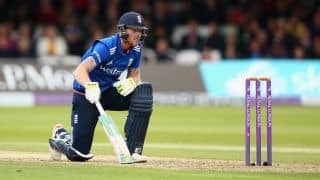 Poll: Ben Stokes was given out obstructing the field against Australia in 2nd ODI, was it the right decision? 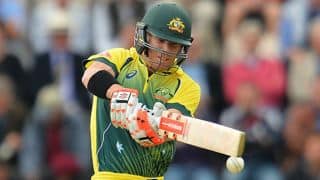