Mitchell Johnson grabbed a career-best 6-31 and Shane Watson smashed a brisk 69 to guide Australia to a seven-wicket win over Sri Lanka in the first one-dayer. 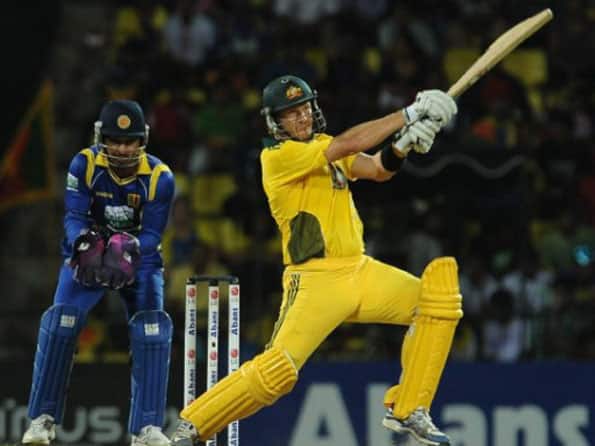 Shane Watson in action during his innings of 69 AFP

Mitchell Johnson grabbed a career-best 6-31 and Shane Watson smashed a brisk 69 to guide Australia to a seven-wicket win over Sri Lanka in the first one-dayer.

Opener Watson cracked six sixes and five fours in his 51-ball knock as Australia achieved a 192-run target with more than 11 overs to spare for a 1-0 lead in the five-match series.

Watson then kept pressure on Sri Lanka with an exciting strokeplay, reaching his 24th half-century in one-dayers with a six off unorthodox spinner Ajantha Mendis.

He dominated a 59-run stand for the opening wicket with Brad Haddin (12) before falling in the 12th over, but had put his team in a strong position at that stage. He also completed 4,000 runs in one-dayers during his knock.

Skipper Michael Clarke (53 not out) then added 101 for the third wicket with Ricky Ponting (53) to steer his team home.

“The wicket was fantastic. It was dry but held together better than I expected,” said Clarke.

“It is important that I lead from the front and it is great having Ponting at number three with all that experience at the other end.”

Australian paceman Brett Lee earlier became the seventh bowler to take 350 wickets in one-dayers when he dismissed Nuwan Kulasekara (34) for his lone victim of the innings.

Sri Lanka were struggling at 117-7 following Johnson’s four-wicket burst in his opening spell before lower-order batsmen Suraj Randiv, who hit one six and four fours in his 41, and Kulasekara put on 60 runs for the eighth wicket.

Man-of-the-match Johnson ended Sri Lanka’s resistance when he had Randiv — the home side’s highest scorer — caught in the deep and then bowled Ajantha Mendis in his ninth over.

“This was not a 190 wicket. We did not bat well and our shot selection was not good. I think our spinners bowled well, but they did not have runs to defend,” said Sri Lanka captain Tillakaratne Dilshan.

Sri Lanka got off to a solid start after winning the toss when Upul Tharanga (34) and Dilshan (29) put on 54 for the opening wicket before Australia struck back.

Tharanga, returning to the side after serving a three-month drugs ban, looked in good touch as he fluently drove Lee for two successive fours in the opening over.

Sri Lanka’s slide began with the dismissal of Tharanga, who was bowled by left-arm spinner Xavier Doherty while attempting to cut after hitting seven fours in his 28-ball knock.

Johnson struck in his first over when he had Mahela Jayawardene caught behind and then had Kumar Sangakkara caught in the covers. He also accounted for Jeevan Mendis and Angelo Mathews in his opening seven-over spell. (AFP)