In-form Kurtis Patterson was added to Australia‘s squad on Monday for the upcoming Tests against Sri Lanka as selectors try to fix a batting line-up that failed to fire during the home Tests against India.

National selector Trevor Hohns said Patterson had been “pushing his case for selection for some time”.

“We have been asking batters around the country to score hundreds if they want to be considered for selection,” Hohns added in a statement.

“Given Kurtis’ consistent performances for NSW and his two unbeaten centuries in last week’s tour match against our upcoming opponent, Sri Lanka, we believe he deserves to be added to the Test squad.”

The hosts had a poor Test series with the bat against India and no Australian reached triple figures at home in a series of four Tests or more for the first time since 1882-83.

The first Test — a day-nighter — starts Thursday in Brisbane. The second will be played in Canberra. 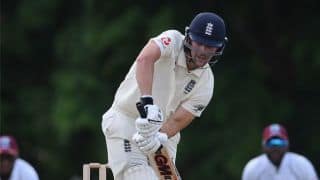