A strong Indian crowd at the Sydney Cricket Ground (SCG) was left heartbroken as Australia dashed their hopes with a 95-run victory in the ICC Cricket World Cup 2015 semi-final. Once Australia had plundered 328, India were always going to find it tough. Australia kept the pressure on India and did not allow them to get going despite a solid start. Michael Clarke s men have now setup a final date at the Melbourne Cricket Ground (MCG) against their trans-Tasman rivals New Zealand. Full Scorecard: India vs Australia, ICC World Cup 2015 Semi-Final 2 at Sydney

India began their run-chase with optimism. Rohit Sharma and Shikhar Dhawan battled out the initial tough phase and heightened hopes of success. Most people were talking about India s two big run-chases in 2013 the ones at Jaipur and Nagpur. But, this game was a World Cup semi-final and that adds a lot more pressure. Also, Australia have had great success at the SCG and India could only hope to sustain their aggressive streak to give themselves a chance. Blog: India vs Australia ICC Cricket World Cup 2015 semi-final

Dhawan completed 400 runs in the tournament and played some great shots during his innings of 45. He played with confidence through the off-side and was walking across to hit to leg. In the 13th over, India had done well to get 76, but then Dhawan holed out to deep point. That was the beginning of the end. Virat Kohli was dismissed soon for a single and Rohit too went back for 32. Ajinkya Rahane and MS Dhoni put up a brave resistance but the rate kept soaring. Rahane battled during his 68-ball 44. Dhoni gave the crowd a few thrills with a couple of big hits, but India were never in the game. Top 10 batsmen in ICC Cricket World Cup 2015

Most would have expected this result once Australia had won the toss and chosen to bat first on a good wicket. Aaron Finch s calm 81 and Steven Smith s aggressive hundred helped Australia put up that big score. It was quite an exhibition of batting. At one end, you had Smith, who is in the form of his life. Then there was Finch, who has struggled after his ton in the first game. He battled it out in the middle and worked hard for his 81 runs. In a sense, the 182-run stand between them setup the victory. Smith continued to flick, pull and cut as India had no answers. Top 10 fielders in ICC Cricket World Cup 2015

India did manage to get back when they picked up a few quick wickets as the slog overs approached. Shane Watson essayed an important cameo of 28, but it was Mitchell Johnson s nine-ball 27 at the death that gave Australia impetus and took them to 328.

Although India would be disappointed by this defeat, they have done exceedingly well in this World Cup to win seven games in a row. On this day, they ran into a better team in these conditions, who deserved to go through to the final. ICC Cricket World Cup 2015: Complete Coverage 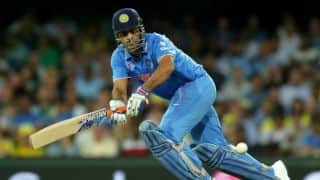 MS Dhoni goes past Kumar Sangakkara, registers most runs by a wicketkeeper-captain in World Cup cricket