Australia maintained their six-year unbeaten run against the West Indies when they cantered to a 64-run victory in the first one-dayer on Friday after the home side suffered an embarrassing batting collapse. 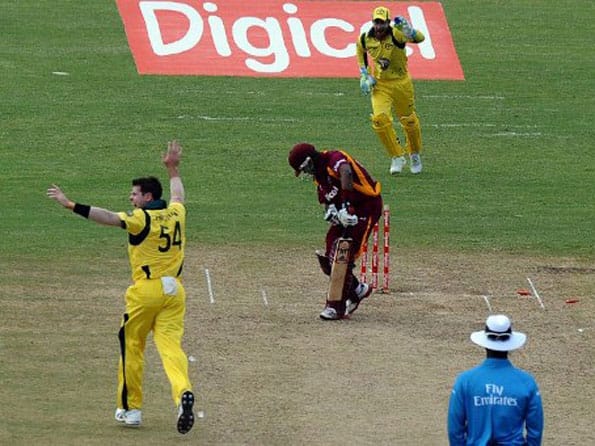 Chasing a modest target of 205 runs, West Indies were bowled out for 140 in the first ODI match against Australia AFP

Australia maintained their six-year unbeaten run against the West Indies when they cantered to a 64-run victory in the first one-dayer on Friday after the home side suffered an embarrassing batting collapse.

Chasing a modest 205 target, West Indies, who had lost 14 of their last 15 one-dayers against the Australians coming into the match, were well set at 97 for three in the 24th over.

But they then lost their next six wickets for a paltry seven runs and despite a final-wicket flourish with skipper Darren Sammy hitting 35, with five fours and three sixes, the Windies were still left looking for a first win over Australia since 2006.

A fourth-wicket partnership of 64 between Marlon Samuels, who made 35 with three huge sixes off one over by left-arm spinner Xavier Doherty and Dwayne Bravo (32 off 43 balls with five fours and a six) had put the West Indies in the driving seat.

But once Bravo, bowled by Dan Christian, and Samuels had been dismissed in successive overs, West Indies were bowled out for 140 in the 33rd over with Doherty taking 4 for 49 off eight overs.

“We knew it was an average score and knew it should be enough if we bowled well,” said Australia captain Shane Watson.

“Dwayne Bravo was batting very nicely so we knew we needed a breakthrough but the surface was offering help to the quicks and spinners. Xavier Doherty came back really nicely when he changed ends. All the bowlers were good today.”

Sammy admitted it had been another poor day for the home team.

“We are very disappointed. Losing six wickets for seven runs set us back a little bit,” he said.

“Hopefully we can bounce back in the second match on Sunday. We have two more games here, we have a history of getting better as a series goes on.”

Australia had made 204 for eight off their 50 overs after winning the toss and electing to bat on a typically slow Arnos Vale pitch.

Twenty20 skipper George Bailey marked his one-day debut with the top score of 48 off 67 balls with five fours, a steady performance which earned him the man of the match award.

Opener David Warner was the next best with 40 off 55 balls, an innings which also featured five boundaries.

Australia went into the game rocked by the decision of veteran wicket-keeper Brad Haddin to return home for personal reasons.

Matthew Wade, who is behind the stumps for the one-day series, failed to shine, out for a first ball duck, caught by Dwayne Bravo off slow bowler Sunil Narine.

Spinners Narine and Marlon Samuels pinned down the Australians, conceding just 53 runs off 18 overs while the tourists’ failure to score a six highlighted the sluggish nature of the pitch.

Skipper Shane Watson made a brisk start, scoring a quickfire 21 before he was out lbw to Dwayne Bravo.

Warner and Peter Forrest added 60 for the second wicket but Forrest struggled to 26 from 64 balls when he was stumped off Samuels.

Warner was out four balls later in the same Samuels over, falling to a fine diving catch by Kieron Pollard in the covers.

David Hussey was caught behind for a seven-ball duck off Roach before brother Michael hit 32 from 57 balls when he was out, caught at long-on off Bravo.(AFP)