Australia are in complete control of the second Ashes Test at Lord's, London.

Australia finished Day Two of the second Ashes Test right in command of the 2nd Ashes Test at Lord’s London. After putting up runs on the board, the Australian bowlers left England huffing and puffing for a score of 85 for four at the end of play. England have their captain Alastair Cook and Ben Stokes battling it out for them. They have added 55 runs so far and will be key going into the third day of the second Ashes Test. Stokes in particular was aggressive against Nathan Lyon and the host will need more of this as they still trail by 481 runs.

The visitors declared for 566 for eight on Day Two of the second Ashes 2015 Test at Lord’s, London. The declaration came just moments after Tea and with England having 29 overs to bat, the hosts had a horror start losing Adam Lyth in the very first over of the game. Lyth was caught behind for a score of naught. Gary Ballance flirted with danger for some time before getting bowled by Mitchell Johnson, who then returned to dismiss Joe Root who was trying to punch a short ball through covers. Josh Hazlewood in between cleaned up Ian Bell as England were at once 30 for four. Live cricket updates: England vs Australia, 2nd Test at Lord’s, Day 2

Play on Day Two got off to a dramatic start as James Anderson hit Rogers on his head as the later tried to duck under a short one but was hit on the side of his head. He hit a couple of good shots after that but soon departed for 173, inside edging a ball from Stuart Broad. That ended the 284-run stand; highest for any wicket for Australia at Lord’s. Michael Clarke came in but did not quite make an impact and was out for a low score of 7, when he hit Mark Wood straight to Gary Ballance at square leg. Broad took two quick wickets in the session at the start, he first had Adam Voges caught behind and then bowled Mitchell Marsh for a low score. Catch live cricket scores and updates of England vs Australia 2nd Ashes 2015 Test at Lord’s, Day 2 here

Steven Smith and Peter Nevill then got together to add 91 runs to help Australia get past 500. Smith in the process became the first Australian to score a Test double hundred after Bill Brown in 1938. He though could not carry it further and was out leg before, trying to reverse sweep Root for 215. Nevill looked impressive for his 45 but was caught by Ali at mid off of the bowling of Root again. Australia headed into Tea at 562 for seven. Read: Ashes 2015: Steven Smith’s battle to Lord’s honours board

Australia were 337 for one at the end of the first day’s play of the second Ashes Test. Rogers and Smith had played through the day after they lost David Warner earlier in the day for a score of 38 when he tried hitting Moeen Ali over covers but was caught by Anderson at wide long off. England had a couple of chances but they did not grab them. Ian Bell dropped Smith when the Australian was just on 50 then. He went onto score his tenth Test ton by the end of play. Read: Rogers, Smith propel AUS to 337/1 at stumps on Day 1 of second Ashes Test

Earlier on Day One, Australia won the toss and elected to bat first. Australia made a couple of changes, bringing in Mitchell Marsh and Peter Nevill for Shane Watson and Brad Haddin. England went into the game unchanged from the previous Test. 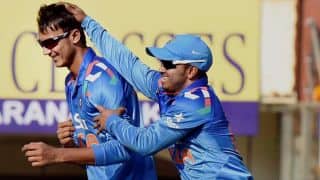