A clueless India were heading towards another humiliating series defeat with their struggling top order batsmen surrendering meekly in the third cricket Test against Australia on Saturday. 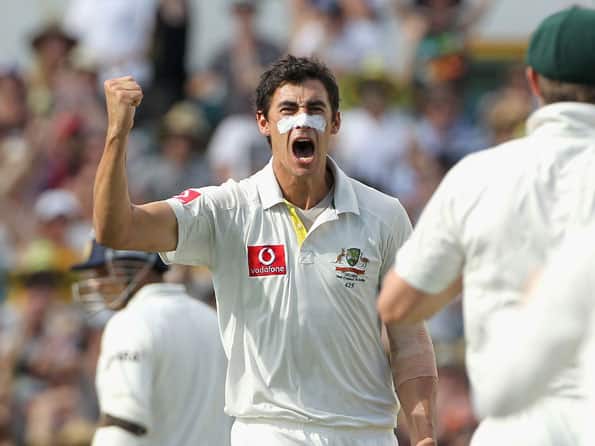 A clueless India were heading towards another humiliating series defeat with their struggling top order batsmen surrendering meekly in the third cricket Test against Australia on Saturday.

Trailing by 208 runs in the first innings, India were reeling at 88 for four in their second innings at stumps on the second day on a bouncy WACA pitch.

The visitors now face the possibility of another innings defeat as they trail by 120 runs with six second innings wickets in hand after Australia had made 369 all out in their first innings, riding on David Warner’s blistering 180.

Australia, on the other hand, are on the verge of claiming the Border-Gavaskar Trophy with a possible win of the third Test inside three days to go 3-0 up in the four match Test series.

The hosts had beaten India in the first Test in Melbourne by 122 runs and clinched the second Test in Sydney by an innings and 68 runs.

Out of form openers Gautam Gambhir (14) and Virender Sehwag (10) were once again sitting ducks to the new ball while Sachin Tendulkar (8) — out to a debatable LBW decision, and VVS Laxman (0) followed them quickly in the hut.

Rahul Dravid (33) and Virat Kohli (21) then saw through the day and have so far put on 37 runs for the unseparated fifth wicket.

For Australia, left-arm paceman Mitchell Starc did the star turn for as he removed Gambhir and Tendulkar in the space of seven deliveries to rock the visitors.

India survived the first 10 overs of the day without losing any wicket though Gambhir, akin to first innings, was getting beaten on and off before Australian skipper Michael Clarke pressed Starc into operation.

The tall left-arm paceman’s second delivery was a brute of a ball which climbed on from a length and an evasive Gambhir could only lob it for the point fielder to take a low catch.

Sehwag followed in the next over, a dismissal quite similar to that in the first innings, when he went back to a delivery which lifted a little on the off-stump and took the edge to the wicketkeeper.

Tendulkar played a cut over gully fielder to fence off fast bowler Peter Siddle but from the other end, Starc made one nip back and hit him in front of the stumps. Umpire Aleem Dar was prompt to raise finger in affirmation. Tendulkar was extremely unhappy with the decision and went back to the pavilion shaking his head.

The situation only turned worse when Laxman played at a lifting delivery from Ben Hilfenhaus with hard hands and Shaun Marsh in the slip cordon made no mistake with the chance.

The poor batting undid the good work of the bowlers who had bundled out Australia for 369 in the first two sessions, claiming the last nine wickets for 139 runs.

Umesh Yadav was the pick of Indian bowlers with five wickets for 93 runs, this being his first five-wicket haul.

But the spell which put the skids under the Australians’ feet was delivered by Zaheer Khan and Ishant Sharma in the afternoon. They bowled 16 overs in tandem after lunch and claimed three wickets. Australian batting then came unstuck and were all out in the extended middle session.

Overnight centurion David Warner continued his good work of yesterday and made 180 before falling in the deep to Ishant. Warner could have been out for 126 in the team total of 193 for no loss had Virat Kohli at first slip had accepted a chance off Zaheer.

The Australian openers, who began the day at 149 for no loss, put together 214 runs for the first wicket which came after three years. Simon Katich and Phil Jacques had raised 223 runs together against West Indies in Barbados in 2008-09.

After the first hour of relative calm, India picked up a clutch of three wickets, all courtesy Umesh Yadav who followed the Australian example of bowling full and on seam. His victims in the first session were Ed Cowan (74), Shaun Marsh (11) and Ricky Ponting (7).

Ishant Sharma got the afternoon going when he had Warner caught at the long on boundary by Yadav for 180. Warner batted for 261 minutes and 159 balls and hit 20 fours and five towering sixes during his knock.

Zaheer then got into action and, coming round the wicket, made Clarke nibble one behind the stumps for 18 runs.

That there was no love lost between Zaheer and Brad Haddin was evident when the left-arm paceman sent down a snorter which hit the Australian wicketkeeper painfully in his left forehand. Two deliveries later, Haddin played back to a swinging delivery and edged a catch behind the stumps.

It was Yadav’s full-pitched delivery that cleaned up Siddle from the other end. It was a beautiful delivery when swung in and left the right-hander late to hit his off-stump.

Yet Siddle made 30 off 31 balls in 41 minutes with four fours and played a valuable hand for the hosts.

As the tea-break approaches, Yadav bowled a short delivery which had Ryan Harris in a tangle. The right-hander could only spoon it up for Gambhir to accept the chance backward of short leg.

Virender Sehwag took the final wicket when Ben Hilfenhaus holed him out to long on.(PTI)