Australia suffered batting collapses across the three-match T20I series against Pakistan in the UAE.

Australia suffered batting collapses across the three-match T20I series against Pakistan that concluded recently in the UAE. World’s top-ranked T20I side Pakistan recorded a 3-0 clean sweep after securing a 1-0 win in the preceding two-Test series.

Chris Lynn, who was part of the T20I side, said the team, while ensuring they play positive brand of cricket, need to show some patience to take calculated risks.

“We just played reckless cricket over in the UAE,” Lynn was quoted as saying by Cricket.com.au on Wednesday. “We want to play fearless cricket, not reckless and I think there’s a massive difference there. So for us it’s about going out there trying to dominate, and taking calculated risks.”

Australia next host South Africa in a three-match ODI series and Lynn has urged the batters to keep their egos aside and concentrate on spending time in the middle.

“We’ve always tried to play a positive brand of cricket. Throwing the first punch in a one-dayer is always handy, but with that comes risk as well. We want to try and minimise the risk; over in the UAE we probably took too many risks, so maybe put our egos aside a little bit and just bat.

“We know the more time you spend in the middle, you’re going to cash in. It’s pretty simple we’re just going to try and nail the basics. We do that, and I think we go a long way towards winning the series,” he said.

Lynn has been battling injuries which has seen him giving up red-ball cricket and avoiding diving in the field to preserve his injury-prone shoulder.

After a stellar run in Australia s domestic one-day competition, he didn’t have a productive outing in the UAE T20Is. But he’s been recalled in the ODI squad and hopes to quickly repay the faith shown in him.

“I’m hoping to bounce back as quickly as possible. I’m happy to bat anywhere in the green and gold. Preferably I’d like to be up the top, but wherever JL (coach Justin Langer) sees fit, I’m happy to play that role.”

Reiterating his decision to skip first-class cricket this season, Lynn his plotting his way into the Test side through white-ball cricket something the current limited-overs skipper Aaron Finch has successfully managed to do in the recent past.

“I won’t be playing any Sheffield Shield this summer. The body’s getting better, and getting through the JLT Cup was massive from a confidence (point of view). It’s like you’ve got to walk before you can run, so I’m at that stage at the moment I don’t want to get too far ahead of myself, but if I do happen to score runs in these next three games, then obviously I’d put my hand up for Test selection, but I think that’s a little bit out of the equation,” he said. 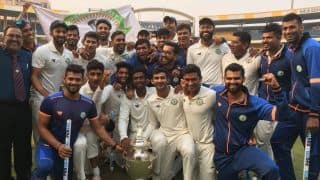 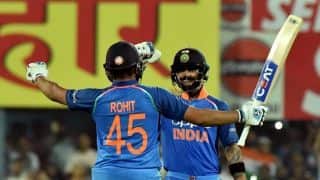