Bangladesh keep on struggling against visitors Australia, losing left, right and centre on Day Four of the second Test.

Bangladesh keep on struggling against Australia, losing wickets left, right and centre on Day Four of the second Test, at Zahur Ahmed Chowdhury Stadium, Chittagong. Australia had got rid of five Bangladesh batsmen to establish their dominance earlier in the first session. Captain Mushfiqur Rahim, Sabbir Rahman and Mominul Haque put up some resistance in the second session, but none of them went past 31. At tea, Bangladesh are 154 for 8 with Mehidy Hasan (13*) and Taijul Islam (2*) at the crease. They lead by 82 runs now, and will definitely want to stretch the lead as much as possible to give their bowlers a fighting chance.

The Australian bowlers kept producing chances which kept Bangladesh under pressure. Most of the batsmen failed to read spin. They hardly recovered after Nathan Lyon reduced them to 43 for 5. The first partnership of any note came between Mushfiqur (31) and Sabbir (24). They added 54, helping Bangladesh avoid the ignominy of an innings defeat. But soon Australia broke the partnership and steered the momentum in their favour.

Nathan Lyon got his side the much-wanted breakthrough, getting the wicket of Sabbir. Lyon got ample turns but it was the lack of bounce that undid Sabbir. Towards the end of his knock, Sabbir did look impatient and eager to counterattack. Lyon read his mind and tossed up the ball; Sabbir, having already left the crease, tried to defend and was beaten; Matthew Wade executed his second stumping of the innings.

The left-handed Mominul had been pushed down the order, presumably to allow Mushfiqur and Sabbir counter Lyon. However, Mushfiqur himself followed Sabbir: Pat Cummins bowled a good-length ball outside off that Mushfiqur edged to Wade to depart for 31.

Mehidy and Mominul (29) kept things going for Bangladesh. Mehidy was hit by a Cummins bouncer that hit him on his thumb before proceeding to the helmet. However, he marched on with a bleeding thumb. Unfortunately, just before tea, Mominul tried to sweep Lyon and top-edged one to Cummins.

Mominul s wicket was Lyon s 45th in 2017. He went past Ravindra Jadeja and Ravichandran Ashwin (44 each), and is currently at the top of the chart. 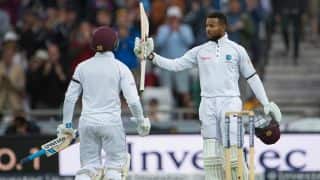 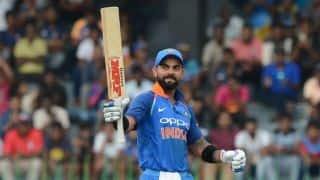