Australia won the final ODI against Pakistan by 57 runs at Adelaide Oval on Thursday to complete a 4-1 victory in the five-match series.

Australia won the final ODI against Pakistan by 57 runs at Adelaide Oval on Thursday to complete a 4-1 victory in the five-match series. Chasing a mammoth 370 to win after producing a poor show on the field with the ball, Pakistan never looked like they were in control of the chase as they trudged all along in their innings at around 5 or 6 runs an over, when they were originally required to score at more than 7. Babar Azam scored a 109-ball 100 and Sharjeel Khan once again played a brisk innings, but Pakistan found no support from any other batsmen.

Pakistan were bowled out for a mere 312 in their 49.1 overs, with Mitchell Starc claiming 3 wickets and Pat Cummins grabbing 2 wickets. On a batting-friendly wicket at the Adelaide Oval, Pakistan managed their highest total in the five-ODI series, but it was not enough as Australia s total always looked beyond the visitors. In pursuit of an improbable target, Pakistan were buoyed by a sturdy 130-run stand for the second wicket between Babar and Sharjeel, who once again proved why they remained the best bet for the visitors. The middle-order flopped once again with Umar Akmal contributing 46 off 40 balls. FULL CRICKET SCORECARD: Australia vs Pakistan, 5th ODI at Adelaide

Earlier in this series, Australia had won the first ODI by 92 runs, but in the next game, Pakistan bounced back to post a 6-wicket win at Melbourne. Australia got their act together in the next two games to post impressive wins at Perth and Sydney 7 wickets and 86 runs respectively to take an unassailable 3-1 lead.

Australia had earlier won the three-Test series with a margin on 3-0, which means Pakistan lost 7 out of their 8 matches on the tour.

It was a day that belonged to the batsmen, but those from Pakistan never showed their intent as well as the hosts had, earlier in the day. Electing to bat first, David Warner and Travis Head were involved in a record partnership of 284 runs, which happened to be Australia s best for any wicket in ODI cricket. Full Cricket Updates, Pakistan vs Australia, 5th ODI at Adelaide

Warner scored 179 off 128 balls with 19 boundaries and 5 sixes, whereas Head got his maiden ODI century, scoring 128 off 137 balls. Their partnership for the first wicket was broken in the 42nd over of the innings, following which there was a flurry of wickets and Australia ended at 369 for 7 in their 50 overs.

Warner fell 6 runs short of the highest individual total by an Australian. But his knock of 179 at Adelaide Oval is now the second highest total against Pakistan (highest being Virat Kohli s 183) and the highest at this venue.

It looked like Warner would finally get to his ODI hundred but for the third time in his career he was dismissed in 170s.

Pakistan s start was poor as Starc got Azhar Ali leg-before early on. But as it has happened earlier in the series, Sharjeel and Babar got together to take Pakistan ahead. They kept scoring at close to 6 an over, with Sharjeel being the aggressor and Babar holding it together from the other end. Sharjeel, however, disappointed once again as he fell in the 70s once again.

The burly opener, who was at one point of time seen launching a verbal barrage against James Faulkner, clobbered 2 sixes and 9 boundaries to score 79 off 69 deliveries.

Babar went on to score 100 off 109 balls, with the help of 7 boundaries and 1 six. He played the role of the sheet anchor to a great effect, but the failure of Mohammad Hafeez (4) and Shoaib Malik retiring hurt at 10 after being hit on the wrist spoiled Pakistan s chances. Umar Akmal scored a 40-ball 46, but like many others, he too could not keep up with the asking rate which was touching 10 an over by then.

Man of the Series: David Warner 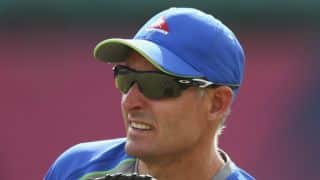