While the first session was lost due to heavy rains at the Zahur Ahmed Chowdhury Stadium, Chittagong David Warner made sure Australia comfortably take the lead against Bangladesh on Day Three of the second.

While the first session was lost due to heavy rains at the Zahur Ahmed Chowdhury Stadium, Chittagong, David Warner made sure Australia comfortably take the lead against Bangladesh on Day Three of the second Test. However, the Bangladesh bowlers helped their side make a comeback, getting five Australia batsmen out before tea. Australia are 321 for 5 and lead Bangladesh by 16 runs, with Glenn Maxwell unbeaten at 25.

As it rained constantly at Chittagong, lunch was announced without a ball being bowled and the match resumed right after the end of lunch as the rain stopped. David Warner and Peter Handscomb had put up a strong partnership on Day Two, both scoring their half-centuries. On Day Three, the duo took team s score past 250 and right after that, Handscomb (82) was run out. Handscomb, who hurried for a single, was sent back by Warner but failed to make to the crease in time. Shakib Al Hasan, meanwhile, executed a direct hit to get the batsman out.

Warner completed his ton, the 20th of his Test career, soon after. He partnered with Maxwell and took things further. But before Australia could reach 300, birthday boy Mustafizur Rahman got rid of set Warner for 123. It was a short delivery by Mustafizur which his Sunrisers Hyderabad (SRH) teammate wanted to play through fine leg. Instead, cramped of room, he played it to Imrul Kayes at leg gully. After juggling it thrice, Kayes grabbed on to it, helping his side get a crucial wicket.

The final wicket of the session was that of Hilton Cartwright, who is playing his second Test. Before Maxwell and Cartwright could build big on the partnership, the latter was sent back for 18. One of his shots had hit Mehedi Hasan on his rib cage a few deliveries back but the bowler managed to induce an edge off the batsman. 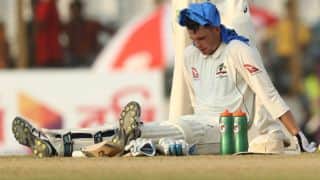 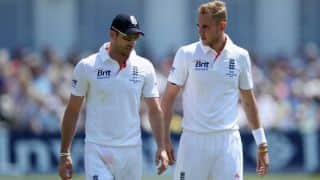