Not since October 11, 2018 had an Australia batsman crossed 84 until day one at Manuka Oval.

After 113 days without a single Test century, Australia had two within an hour. On day one of the second Test against Sri Lanka at Canberra’s Manuka Oval – making its Test debut – the pair of Joe Burns and Travis Head reached three figures either side of the tea break to allow a country’s cricketing fans to exhale.

Since Usman Khawaja batted nearly all through Australia’s final innings on a wearing Dubai surface in the second week of October 2018, thus helping seal an epic draw versus Pakistan, not a single Australian batsman had scored a Test hundred. (SCORECARD: AUSTRALIA vs SRI LANKA, 2nd TEST)

In six Test matches, the best individual score was Head’s 84, scored last week during the day-night Test against Sri Lanka. During four Test matches with India, the best any Australian batsman managed was 79. (READ MORE: Joe Burns and Travis Head in record stand for Australia)

As criticism grew of an already depleted batting order grew during the series defeat to India, the pressure was on Australia’s batsmen to deliver. The three-day win in Brisbane last week masked some of the deficiencies with Head scoring 84 and Marnus Labuschagne 81 in the team’s highest partnership of the home summer.

Come the Canberra Test, and Australia were 28/3 against a new-look Sri Lankan pace attack. Up stepped Burns with his fourth Test century, to become the first Australian to reach three figures in 113 days. After Burns got there with a dab to cover before tea, Australia’s vice-captain Head secured his maiden Test hundred after the break with a drive into the off side for four.

Head converted his innings into 161 before he was fourth out, whereas Burns was batting on a Test-best 172 not out at stumps with Australia at 384/4.

Their partnership of 308 is now the best for Australia against Sri Lanka, outdoing the 260 that Steve Waugh and Dean Jones put on in Hobart in 1989. 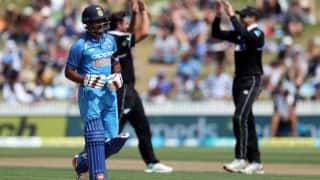